US ‘strong and sure’ of Mideast security: Pentagon Chief at IISS | THE DAILY TRIBUNE | KINGDOM OF BAHRAIN 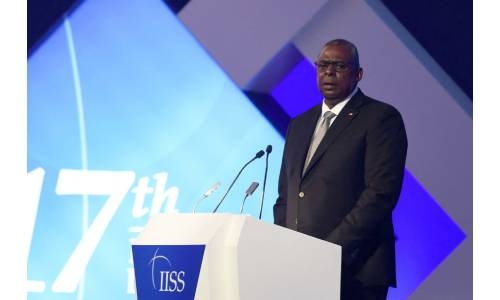 US ‘strong and sure’ of Mideast security: Pentagon Chief at IISS

Joe Biden’s administration of the United States is “strong and sure” in its commitment to security in the Middle East, US Defence Secretary Lloyd Austin yesterday told IISS Manama Dialogue, despite Washington increasingly turning its attention towards countering China.

“No one should doubt our resolve or capabilities to defend ourselves and all those who work alongside us to keep the region secure.

Our potential punch includes what our friends can contribute, and what we have prepositioned, and what we can rapidly flow in.”

“Our friends and foes both know that the United States can deploy overwhelming force at the time and place of our choosing.”

“Fighting terrorism and protecting shipping lanes are among the security priorities in the region,” he said.

“Working together is a crucial requirement to succeed in going forward,” he said.

Austin was the keynote speaker at the international forum held annually in the capital Manama and brought together policy-makers from around the world.

He emphasized that US administrations regardless of their political orientations supported partnerships with the Middle East.

Austin commended the Middle East leaders for their prompt support to the US when Washington sought assistance to evacuate thousands of people from Afghanistan.

“As we wound down the 20- year war in Afghanistan, the world witnessed again the power of our network of partnerships.

When America asked for help, our friends stood up.

Leadership from [the Middle East] region helped us to evacuate 124,000 people from Afghanistan,” he said.

The announcement, however, was not backed by any commitment to further deployments or new weapon sales in the region.

Countries in the Gulf region had expressed uncertainty about Biden’s focus on the region, especially after the US withdrawal from Afghanistan.

Austin speech at the IISS Manama Dialogue predominantly focused on easing this concern, while he also acknowledged that their sole focus globally was on China’s challenge.

“We are working to strengthen deterrence against Iran, and we will work to protect our forces in the region against attacks by Iran or its proxies.”

Unity is the region’s source of strength: King Hamad