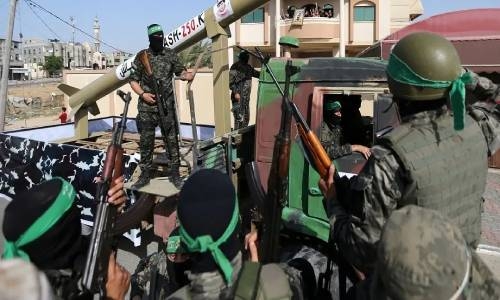 The British Home Office said Friday the Palestinian terror group Hamas had been banned for being a terrorist organization, something the US and EU had done long ago.

In a statement, Home Secretary Priti Patel said, "Hamas has signfiicant terrorist capability, including access to extensive and sophisticated weaponry as well as terrorist training facilities," adding, "That is why today I have acted to proscribe Hamas in its entirety."

What is the reaction to the announcement?

Patel will urge parliament to make the change next week, saying the move was "based upon a wide range of intelligence, information and also links to terrorism." Hamas, she said, was "fundamentally and rabidly anti-Semitic."

Hamas reacted by saying the decision shows bias towards Israel.

By contrast, Israeli Prime Minister Naftali Bennett welcomed the decision "to declare Hamas a terrorist organisation in its entirety — because that's exactly what it is."

Yair Lapid, the foreign minister of Israel, called the decision the outcome of "joint efforts" in the bilateral relationship between the two countries.

Why does the UK ban on Hamas entail?

The ban on the group in its entirety would fall under the Terrorism Act of 2000, bringing UK law in line with allies such as the US and the EU. The militant wing of Hamas, the al-Qassam Brigades which rule the Gaza Strip, was barred under UK law as of March 2001.

Patel said Friday it is not possible to differentiate between the military and political wings of Hamas.

The group's supporters could face 14 years in prison in the UK if convicted. Offenses would include flying the Hamas' flag, arranging meetings of the group or wearing clothing that supports Hamas.

In terms of domestic politics, it could force the opposition Labour Party to take a position on the group. Some of the more far-left members of the Labour Party strongly support the Palestinian cause.