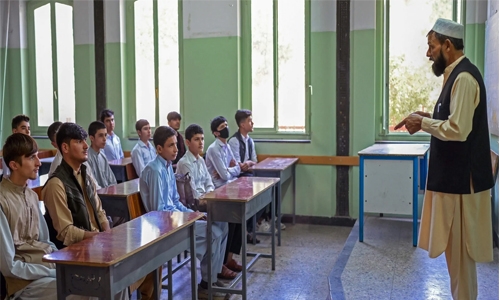 As the Taliban ordered only boys and male teachers back to school, girls stayed home in Afghanistan. But there were some boys who did not go back to schools as they reopened in the country. The Wall Street Journal reported that some boys in the Afghan capital of Kabul stayed home in solidarity with their female schoolmates. “Women make up half the society... I will not show up at school until girls’ schools are open too,” Rohullah, an 18-year-old student of Class 12, was quoted as saying by WSJ.

The Taliban education ministry on Friday said boys' secondary schools would soon reopen. Taliban spokesperson Zabihullah Mujahid told the local Bakhtar News Agency on Saturday that arrangements were being made to reopen girls' secondary schools but he gave no date. "All male teachers and students should attend their educational institutions," a statement, issued late Friday, said, without mentioning anything about women teachers or girl pupils.

The Taliban have said they will not enforce the fundamentalist policies, including a ban on girls going to schools, when they last ruled Afghanistan from 1996 to 2001, and have assured that girls will be able to study but only in segregated classrooms.

Nazife, a teacher at a private school in Kabul, said they had made changes in order to reopen. "Girls study in the morning and boys in the afternoon. Male teachers teach boys and female teachers teach girls,” she told Reuters.

Some girls did go back to their primary schools with gender-segregated classes on Saturday, but older girls are yet to figure out when they would be able to resume their studies at the secondary school level. "Their spirits are down and they are waiting for government announcements so they can resume studying," Hadis Rezaei, who teaches the school's female secondary-level pupils, was quoted as saying by Reuters.

The United Nations has said it was "deeply worried" for the future of girls' schooling in Afghanistan. "It is critical that all girls, including older girls, are able to resume their education without any further delays. For that, we need female teachers to resume teaching," the Unicef, the UN's children's agency, said.