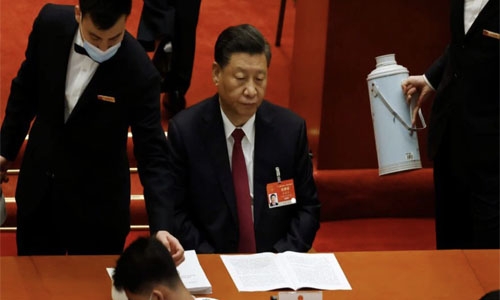 US President Joe Biden discussed the investigation into the origins of Covid-19 during a call on Thursday with his Chinese counterpart Xi Jinping, according to the White House.

"They did discuss a range of transnational issues including Covid-19, and understanding its origins is, of course, a primary concern for this administration," White House press secretary Jen Psaki said on Friday.

"Yes, it was a topic raised, but I'm not going to go into further detail."

Thursday's 90-minute call was the first talk for the two leaders in seven months amid cool relations between the countries.

The outlet reported that Xi suggested to Biden that the countries should continue with contact and dialogue and cooperate on issues including epidemic prevention and control and economic recovery, as well as major international and regional issues like climate change.

Psaki described the call as respectful and candid, not lecturing or condescending, intended at keeping channels of communication open between the countries.

Climate and human rights were among the topics, she said, and though economic matters were discussed they were "not a major part" of the call.

"It wasn't a call that was intended to produce outcomes," according to Psaki.