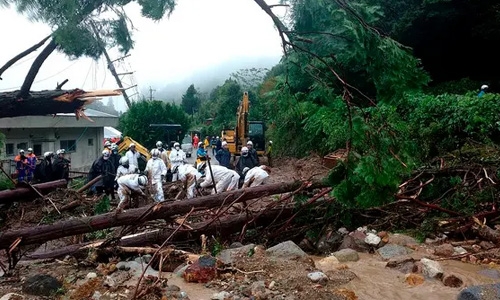 Torrential rain continued to trigger floods Saturday in wide areas of southwestern Japan, damaging homes and disrupting transportation a day after a landslide killed one person and left two others missing.

In the southern city of Kurume, rivers overflowed and residents evacuated from their homes on rubber boats as rescue workers pulled them while wading through muddy water.

Heavy rain has dumped on southern Japan this week, and the Japan Meteorological Agency said more rain is expected in the coming days as a front is stuck above the Japanese archipelago.

The agency expanded heavy rain and mudslide warnings in the Kyushu region to other parts of Japan, including Hiroshima, as the rain front slowly moved eastward, bringing downpours to the ancient capital of Kyoto and Nagao in central Japan.

The rains triggered a mudslide Friday in the city of Unzen in Nagasaki prefecture, burying four people. One of those buried was killed and another was seriously injured. Rescue workers are searching for the two others.

Dozens of homes around the country have been damaged by floods and mudslides, according to the Fire and Disaster Management Agency.

Local authorities have issued the highest-level disaster alert for parts of Kyushu and Hiroshima, affecting about 1.4 million people, though evacuation is not compulsory.

“Shinknsen” super-express trains connecting the southern city of Hakata and Osaka in the west have temporarily suspended, according to West Japan Railway Co.

Taliban close in on Kabul as US scrambles to evacuate