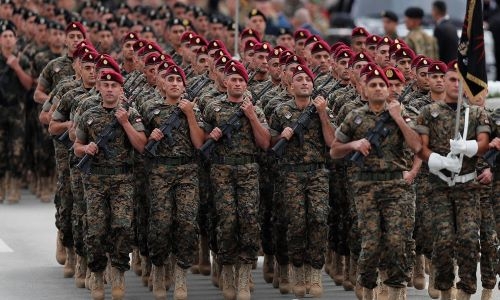 World powers will seek to raise tens of millions of dollars in emergency aid for the Lebanese army at a meeting on Thursday, aiming to prevent the military from collapsing as the country's economic and political crisis worsens, a French official said.

Paris, which has led aid efforts to its former colony, has sought to ramp up pressure on Lebanon's squabbling politicians, after failed attempts to rally them to agree on a new government and launch reforms to unlock foreign cash.

Discontent is brewing among Lebanon's security forces over a currency crash that has wiped out most of the value of their salaries. To tackle that, France will host on Thursday a virtual meeting with partners including the United States, Russia, China and European powers and the Gulf Arab region.

Lebanon's pound has lost 90% of its value against the dollar since late 2019 in a financial meltdown that poses the biggest threat to stability since the 1975-1990 civil war.

Army chief Joseph Aoun was in France in May to warn of an increasingly untenable situation with salaries falling five or sixfold in value, forcing many to take extra jobs and some to leave the army altogether.

"The Lebanese army is the pillar in Lebanon and ensures that the security situation in the country doesn't degenerate so it's an immediate interest to help them carry out their mission," an official at the French Armed Forces Ministry told reporters on condition of anonymity.

The official, who said the kind of support being envisaged was just a temporary solution, said the conference would not seek to pay wages but rather offer food, medical supplies, spare parts for military equipment and even fuel.

The army has long been seen as one of the few institutions in Lebanon that can rally national pride and create unity. Its collapse at the start of the civil war, when it split along sectarian lines, led to Lebanon's descent into militia rule.

Asked whether the French initiative could save the army in the long term, the official said: "When you are in an emergency room in the hospital, you don't think about how much blood you will need in two or three months. It's the same here.