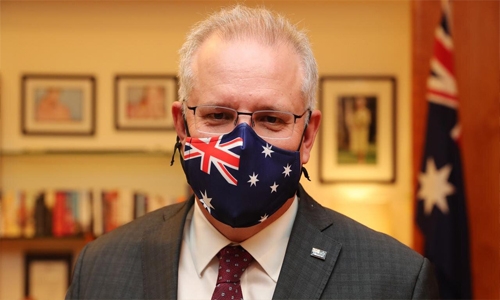 Australia's Prime Minister Scott Morrison on Monday defended his government's decision to ban and impose a jail term and a penalty for Australians trying to return from India, saying it is in the country's "best interests" and to prevent a third wave of infections.

The Australian government, for the first time in history, recently imposed a ban on its citizens from returning home, if they have spent time in India up to 14 days before flying back.

The government threatened to prosecute them with a possibility of five years of jail term or a penalty of 66,000 Australian dollars (USD 50,899).

Morrison said this is a temporary arrangement and a very difficult decision.

"It has been put in place to ensure that we do not get a third wave here in Australia and that our quarantine system can remain strong," he said, adding that it is in the country's "best interests".

He said that he feels terribly for the Indian community.

"We've seen a seven-fold increase in the rate of infection of those in our Howard Springs facility coming back from India."

"It's important that we ensure that we have a temporary pause here to strengthen those arrangements in those quarantine facilities, get stronger testing arrangements, both when leaving India but also on people coming from third countries," Morrison said.

He said that he wants to get those repatriation flights running safely again.

"These are the things we have to do to ensure I can do that, so I can. We've already brought home some 20,000 people from India through supported flights and facilitated flights, and they were just those who are registered. And so that has been a big effort to get people home,'' the Prime Minister told 2GB radio channel.

"We've had the Biosecurity Act in place now for over a year and no one's gone to jail... there hasn't been any irresponsible use of those powers," he said.

Morrison said that there was clear advice from the chief medical officer that it was a decision that was supported and should be taken.

The Prime Minister was criticised by Opposition leader Anthony Albanese for abandoning Australians in India and threatening the travellers with a penalty and a jail term.

"Australia has obligations to our citizens, to people who are Australians - not just to abandon them overseas but then to threaten them is quite an extraordinary action," Albanese was quoted by media reports here on Sunday.

Deputy Nationals leader Matt Canavan tweeted on Monday about the government's decision stating, "We should be helping Aussies in India return, not jailing them.''

On Monday, the daily COVID-19 cases in India showed a slight dip with 3,68,147 new coronavirus infections, taking the total tally of cases to 1,99,25,604, according to the Union Health Ministry.

Travel suspension for Saudis to be lifted on May 17