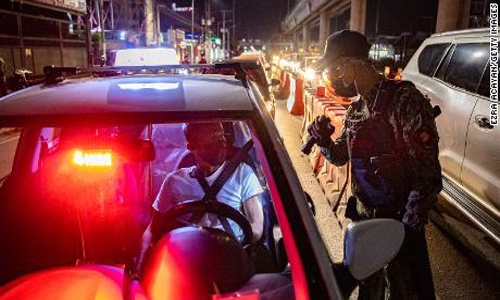 On April 1, Darren Manaog Peñaredondo, 28, left his home in General Trias, a city in Cavite province, which is under lockdown due to rising Covid-19 cases, to buy water, his family said, according to CNN affiliate CNN Philippines.

But he was stopped by police and told to do "pumping exercises" 100 times, according to the report. Police made him repeat the exercises, meaning he ultimately did about 300 repetitions.

"He started to convulse on Saturday, but we were able to revive him at home. Then his body failed so we revived him again, but he was already comatose," his family said, according to the report.

The Philippines has one of the highest reported Covid-19 caseloads of any country in Asia -- it has recorded more than 819,000 infections and 14,000 deaths, according to Johns Hopkins University.

Last month, cases in the country rose sharply, prompting authorities to order more than 25 million people into lockdown -- including those in Cavite province.

The Department of the Interior and Local Government and the mayor of General Trias city have ordered an investigation into Peñaredondo's death, according to the report.

"All police officers who will be proven to have violated the law will be prosecuted and meted with appropriate (administrative) and criminal penalties," the department's undersecretary Jonathan Malaya said in a text message to CNN Philippines.