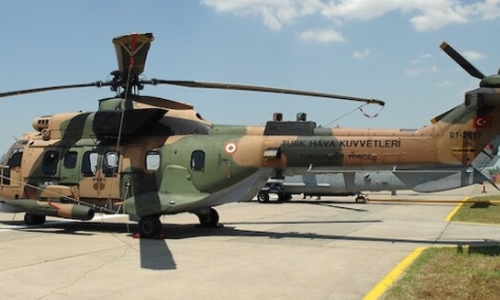 An army helicopter crashed in eastern Turkey on Thursday, killing 11 military personnel on board and injuring two others, the Defense Ministry said. News reports said a high-ranking officer was among the victims.

The Cougar type helicopter crashed near the village of Cekmece, close to the town of Tatvan, in the predominantly Kurdish-populated Bitlis province. It was on its way to Tatvan from the nearby province of Bingol when authorities lost contact with it at 2:25 pm (1125 GMT), the ministry said.

The ministry described the crash as an accident, but it wasn’t immediately known what caused it. HaberTurk television said the chopper is believed to have crashed in adverse weather conditions, including snow and fog.

Cekmece resident Davut Bikec was one of the first people to reach the site.

“One of (the injured personnel) was slightly beneath the helicopter but there wasn’t a lot of pressure on him. I cleaned the snow from his mouth so he could breathe,” Bikec told the state-run Anadolu Agency. “I asked him if he was okay and after he had recovered a little, he said: I am fine.” “I began digging into the snow; My hands got wounds and bruises. I dug, dug, dug and removed the wounded soldier,” he said.

Turkish Defense Minister Hulusi Akar departed for Tatvan together with the country’s chief of military staff and the land forces’ commander to inspect the area, the ministry said.

The location of the crash is in an area where Turkish troops have been combating militants of the banned Kurdistan Workers’ Party, or PKK. The conflict has killed tens of thousands of people since 1984.

The PKK is considered to be a terrorist group by the United States and the European Union.

In 1997, PKK militants attacked a Turkish Cougar helicopter in northern Iraq, killing 11 Turkish soldiers.
More recently, 13 military personnel were killed in 2017, when a Cougar helicopter crashed into power lines shortly after take-off from a base near Turkey’s border with Iraq.