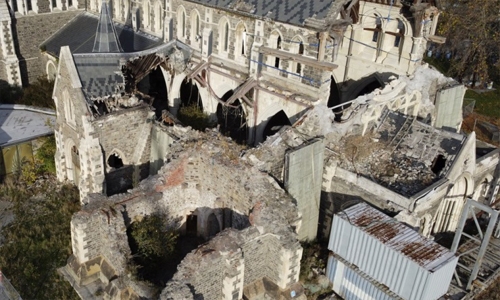 The Christ Church Cathedral was arguably New Zealand’s most iconic building before much of it crumbled in an earthquake 10 years ago. The years of debate that followed over whether the ruins should be rebuilt or demolished came to symbolize the paralysis that has sometimes afflicted the broader rebuild of Christchurch.

As the city on Monday marks one decade since the quake struck, killing 185 people and upending countless more lives, there are finally signs of progress on the cathedral, the Associated Press (AP) reported.

It’s being rebuilt to look much like the original that was finished in 1904, only with modern-day improvements to make it warmer and safer, even to add extra much-needed bathrooms. But first, workers must stabilize the remains.

Peter Carrell, the Anglican bishop of Christchurch, said reopening it will represent a key milestone.

“I think it will be hugely significant because it will be one of the final pieces in the jigsaw of putting Christchurch back together,” Carrell said. “It will be a healing of the heart of Christchurch after the earthquake.”

Still, the doors aren’t expected to open for another six years. Preserving what’s left is more costly and time-consuming than demolishing and starting again. And so far, the mix of funds from insurance, church, council and government sources adds up to only about two-thirds of the 154 million New Zealand dollar ($111 million) price tag.

Keith Paterson, the project director, said the aim is for a fundraising team to raise the rest of the money from both local and international donors.

“We’re very confident we’ll get the money in by the time the project is finished,” said Carrell. “We’ve got plenty of money to start with.”

Elsewhere in the city, shiny new buildings are popping up, along with innovative playgrounds and parks. But where some buildings once stood there are now just empty parking lots, and the migration of shops and businesses to the suburbs that happened after the quake hasn’t yet fully reversed.

There also remains a disparity in neighbourhoods. Parts of the city to the west look much as they did before the quake. But in the east, where the ground was prone to liquefaction, entire suburbs have been razed.

Authorities have deemed the land too unstable for rebuilding. Some suburbs now look like giant parks, with a few fruit trees and power lines the only sign that homes were once there.

Richard Cosgrove’s house by the Avon River in the suburb of Dallington was one of those torn down. The communications adviser recalls the enormous forces at play during the quake.

“The whole area sunk massively,” he said. “We had a wooden villa built-in 1922. Basically, the four corners went in separate directions.”

Cosgrove said the strong community bonds that formed as neighbours tried to salvage their homes and worked on improving the area ended when the government declared it unsafe for rebuilding.

“That broke the community apart,” he said.

Cosgrove and his wife now live outside the city on a small farm.

“We thought if we moved anywhere else in the city it would remind us of what we lost, so we decided to build a new life in the country,” he said.

But he remains upbeat about Christchurch and its future. He said the adversity people have suffered has brought the community together and made it stronger and more resilient, and that many of the foreign workers who came to help rebuild have been so impressed they have stayed.

“We’ve got a really great city,” Cosgrove said. “It’s quite an impressive rebuild that’s gone on. I think of all the great things they have done.”

Still, he says, it would have been nice if it had all happened a little sooner.