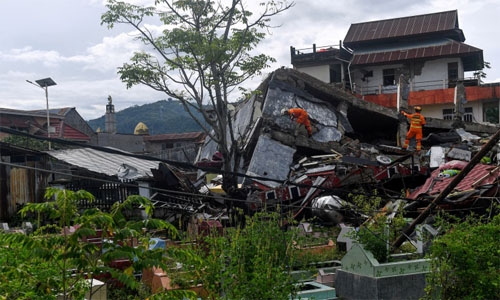 The death toll of a 6.2-magnitude earthquake which shook Indonesia's West Sulawesi province on Friday rose to 62, the national disaster mitigation agency said on Sunday.

Spokesman Raditya Jati said that most of the deaths were in the badly-hit provincial capital Mamuju, where 47 fatalities were recorded, while the other nine victims were found in the neighbouring district of Majene.

The number of those injured also rose to 826 as rescuers managed to retrieve more bodies and survivors from the rubble of houses toppled by Friday's quake, which struck the province at 1:28 am local time. The quake also displaced about 15,000 people, Deutsche press agency (dpa) reported.

"The power supply in some parts of Majene and Mamuju regencies has been restored and vehicles can now pass the main road connecting the two regencies after local military personnel cleared the road with heavy equipment," Jati said.

The province was rattled by a 5.0-magnitude aftershock on Saturday morning, with Meteorological, Climatological and Geophysical Agency saying aftershocks will continue to rattle the region.

Jati said that residents of hilly areas should remain on high alert of possible landslides and falling rocks, while coastal communities should be ready to leave coastal areas after new shocks.