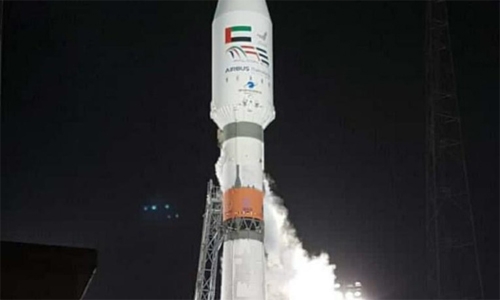 To mark its 49th National Day, the UAE launched the satellite Falcon Eye into space from the French Guiana Space Centre, in South America, at 5:33am UAE time (01:33 GMT).

The Soyuz ST-A rocket lifted off from the launch complex in French Guiana and the earth-observation satellite separated 58 minutes after burns by the Fregat upper stage.

Equipped with a High-Resolution Imager, the satellite is the fourth reconnaissance satellite launched by the UAE, bringing the total number to 12 satellites into orbit.

The data it transmits back to the ground control station will be used for mapping, agricultural monitoring, urban planning and monitoring changes in the environment, helping with response planning for natural disasters, and monitoring the UAE's borders and coasts.

Fitted with an earth-observation payload, with very-high-resolution optical capabilities, the satellite will remain in Low Earth Orbit for 10 years taking high quality imagery of the ground below to relay to the ground control station.

The project began five years ago and was implemented by many experienced engineers and technicians from the UAE Armed Forces specialising in mega project management and military and space systems who were joined by foreign experts.