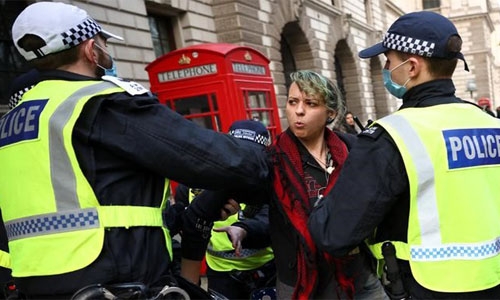 Police in London said on Saturday that they had made 155 arrests as they tried to break up anti-lockdown and anti-vaccine protests.

The police said the arrests had been made for different offences including assaulting a police officer, possession of drugs and breaching coronavirus restrictions. England’s current lockdown ends on December 2.

Earlier police lined up in a number of streets in central London’s West End shopping district and confronted crowds of protesters in St James’s Park, near Westminster, Reuters reported.

The anti-lockdown protesters were joined by groups who oppose a COVID-19 vaccine.

One police officer estimated the protesters, who held up signs saying “Defend Freedom, Defend Humanity”, “No more lies, no more masks, no more lockdowns”, numbered between 300 and 400.

London’s Metropolitan Police said they had intercepted and turned back coaches full of people wanting to join the demonstrations.

“Our policing plan will continue well into the evening and I would urge anyone who hasn’t already dispersed to go home,” said chief superintendent Stuart Bell in the statement.