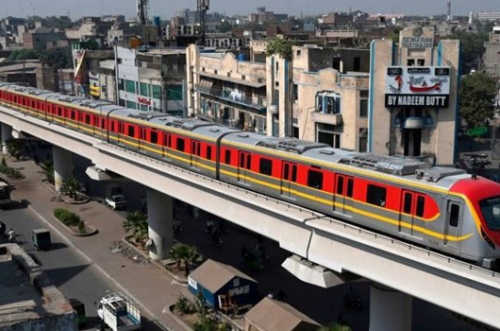 The 27km (17-mile) Orange Line, with more than two dozen stations, will drastically cut travel time across the notoriously congested city, reducing a two-and-a-half-hour bus journey to 45 minutes by metro.

Officials expect about a quarter of a million people will use the system each day once it is fully operating.

It was built with Chinese backing and there are growing questions about the huge amount of debt Pakistan has taken on in recent years.

China has invested tens of billions of dollars in Pakistan as part of its Belt and Road Initiative which aims to link the economies of Asia, Africa and Europe via huge infrastructure projects.

The metro project led to protests from people concerned it would damage some of Lahore's most famous landmarks, in particular the Shalimar Gardens, a world heritage site. More than 600 trees had to be felled along the route.

"I congratulate the Punjab government and the people of Pakistan on this occasion," he said.

Chinese state news agency Xinhua called the Orange Line the beginning of "a new stage for the South Asian country in the public transportation sector".