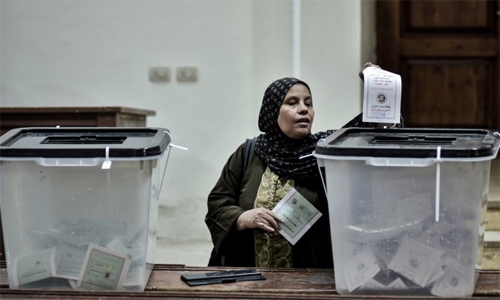 Polls closed in Egypt on Sunday, the second and final day in the first stage of the country’s parliamentary elections that are expected to bring a new legislature dominated by supporters of President Abdel-Fattah al-Sissi. The first stage of the vote kicked off on Saturday in 14 of Egypt's 27 provinces, and ran for two consecutive days, according to Deutsche Press Agency (DPA). Voting proceeded smoothly and no irregularities were recorded on the final day of the election, the electoral commission said, according to state media.

No figures were provided about voter turnout. The polling stations opened from 9am (0700 GMT) for 12 hours on Saturday and Sunday. The second part of the two-stage election is scheduled for November 7-8 in the 13 remaining provinces, including the capital Cairo. The final official results are not expected until mid-December.

Egypt has nearly 63 million eligible voters. More than 4,500 candidates are running as independents and on lists of party alliances for the legislature. They are widely seen as backers of al-Sissi, who has governed Egypt since 2014. The contenders are vying for a total of 568 seats up for grabs in the two stages of the polls. Al-Sissi will name 28 seats, or 5 per cent, bringing the total number of members in the chamber to 596.

The polls come more than two months after the election of a reinstated Senate, the second chamber of the Egyptian parliament. Most Senate seats were won by government loyalists.