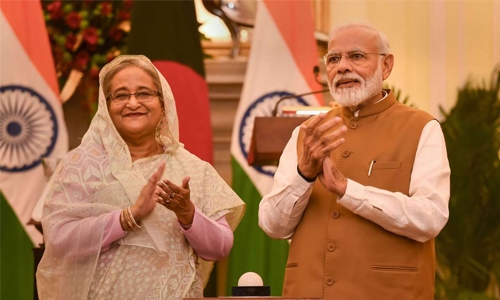 The International Monetary Fund's forecast that Bangladesh is all set to overtake India in terms of per capita GDP in 2020-21 has drawn a wave of counter-arguments stating that the projected scenario would be a short-term aberration as the third-largest Asian economy would again outpace its neighbour in 2021.

The IMF on Wednesday caused a big flutter when its World Economic Outlook report said India's per capita GDP is likely to plummet 10.3 percent to $1,877 - the lowest in four years - due to the sharp economic plunge in the wake of the nationwide lockdown, while Bangladesh is expected to see it's per capita GDP grow by four percent to $1,888.

Indian government sources, however, swiftly countered this, arguing that in purchasing power parity (PPP) terms, India still maintains an edge with its per capita GDP in 2020 is estimated by the IMF at $6,284 as compared to $5,139 for Bangladesh. They contended that data showed that Bangladesh overtaking India in 2020 is a temporary aberration and that India will again overtake Bangladesh in 2021.

They also pointed out that as per the IMF, India's GDP would grow at 8.8 percent in 2021, twice that of Bangladesh at 4.4 per cent.

With GDP estimated at $2.8 trillion, India is currently ranked as the fifth global economic power after the US, China, and Japan.

Until a few years ago, India was significantly above Bangladesh in per capita GDP terms, but the gap has been substantially closed owing to the country's rapidly-rising exports. Besides, during the intervening period, while India's savings and investments remained lukewarm, the corresponding numbers for Bangladesh saw a sizeable surge, analysts said.

Analysts are of the view that if the IMF's projection turns out to be accurate, India would become one of the worst performers in terms of growth in South Asia, relegating the country as the third-poorest in South Asia, just above Pakistan and Nepal who are set to report a lower per capita GDP.

The IMF's stark projection for India comes as a big blow after the country reported an abysmal 23.9 percent GDP contraction in the first quarter of the calendar year.

Recently, the World Bank also revised downward its forecast for the Indian economy by projecting a contraction of 9.6 percent, sharper than earlier estimated, for the fiscal year 2020-21.

The World Bank's grim forecast comes as a reminder that India's aspirations to propel its economy to $5 trillion by 2024-25 will be hardly achievable unless the country attains a growth rate of at least 12 percent in nominal terms and nine percent in real terms.