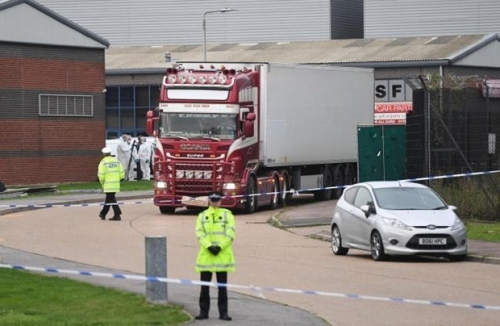 A man accused of manslaughter over the deaths of 39 migrants whose bodies were discovered in the back of a shipping container near London last year pleaded guilty to an immigration offence on Wednesday.

The victims, 31 men and boys and eight women whose ages ranged from 15 to 44, were discovered last October in a container at the back of a truck on an industrial estate in Grays in Essex, about 20 miles (32 km) east of London. British-Romanian dual national Gheorghe Nica, 43, admitted an offence of conspiracy to assist unlawful immigration at London’s Old Bailey court.

Nica is still charged with 39 counts of manslaughter, along with Eamonn Harrison, 23, from Northern Ireland. Two other men are also accused of immigration offences and the trial of all four men is due to begin at the court later on Wednesday. Two other men have already pleaded guilty to manslaughter over the deaths.

In August, a 41-year-old Irish haulier, Ronan Hughes, admitted the offence while Maurice Robinson, 26, from Northern Ireland, who was driving the truck when the bodies were found, pleaded guilty in April. Two other men have also entered guilty pleas to immigration offences following the police investigation. Autopsies concluded that the provisional cause of death of the 39 victims was a combination of hypoxia, or oxygen deprivation, and hyperthermia, or overheating, in an enclosed space.