CIRCLE OF PEACE! | THE DAILY TRIBUNE | KINGDOM OF BAHRAIN 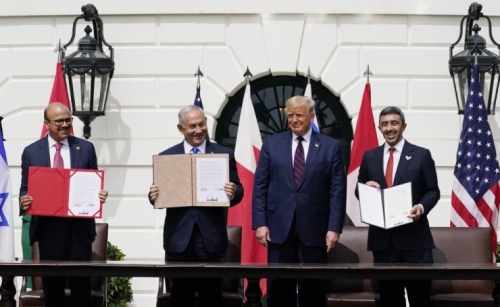 Upon directives from His Majesty King Hamad bin Isa Al Khalifa, the Minister of Foreign Affairs Dr Abdullatif bin Rashid Al Zayani participated in the signing ceremony of the declaration of support for peace between Bahrain and Israel, and the signing of the peace accord between the UAE, the US and Israel yesterday.

The ceremony was held at the White House, in the presence of US President Donald Trump. UAE Foreign Affairs and International Cooperation Minister Sheikh Abdullah bin Zayed Al Nahyan and Israeli Prime Minister Benjamin Netanyahu participated in the signing.

In his speech on the occasion, Dr Al Zayani said that the declaration supporting peace between Bahrain and Israel is “a historic step on the road to genuine and lasting peace, security, and prosperity across the region, and for all who live there, regardless of religion, sect, ethnicity, or ideology.”

He added: “Today’s declaration was made possible by the vision, courage and commitment of His Majesty King Hamad Bin Isa Al Khalifa, who, supported by the people of Bahrain, has protected, institutionalized, and enhanced Bahrain’s centuries-old spirit of co-existence and harmony, and has the wisdom to recognise that genuine co-operation is the most effective means to achieve peace and to safeguard the legitimate rights.

“Thank you, Your Majesty, for this vision of peace for the region based on trust, respect and understanding between all faiths, races and nations.” Dr Al Zayani congratulated “our brothers in the UAE” on their own momentous peace accord with Israel and commended Sheikh Mohamed bin Zayed for his “great leadership and foresight to make peace possible and secure a brighter future for our region”.

The Foreign Minister expressed his particular and deep appreciation to Trump and his administration, and thanked Prime Minister Netanyahu for “these steps from you and your government, recognising that enduring peace and security is only possible through a genuine engagement that protects the rights and interests of countries and peoples in the region”.