Blasts in Iran were attacks? | THE DAILY TRIBUNE | KINGDOM OF BAHRAIN 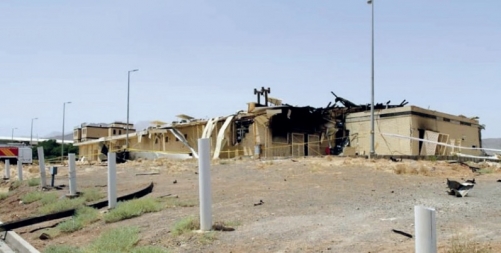 Israeli hands are allegedly behind the mysterious blasts that rocked Iranian facilities, unconfirmed reports said. Several reports claim that an Israeli cyberattack caused the fire at the enrichment facility and explosion at a missile factory. Neither Iran nor Israel confirmed or rejected the speculations.

Iranian security body, without denying the reports, said it had determined the cause of an “accident” at a nuclear site but declined to release details, citing security reasons. It, however, citing unnamed Israeli social media accounts claims that the Jewish state was behind the incident, issued a warning.

“If there are signs of hostile countries crossing Iran’s red lines in any way, especially the Zionist Regime (Israel) and the United States, Iran’s strategy to confront the new situation must be fundamentally reconsidered,” Iran’s Supreme National Security Council said.

A spokesman for Iran’s Supreme National Security Council, referring to one of the country’s main uranium enrichment plants said, “Investigations by relevant bodies have accurately determined the cause of the accident at... Natanz nuclear complex.” “Due to certain security concerns the cause and details of this accident will be announced at the proper time,” state news agency IRNA quoted Keyvan Khosravi as saying.

The Islamic republic’s nuclear body said the incident happened Thursday at a warehouse under construction at the complex in central Iran, saying it caused no casualties or radioactive pollution. Iran’s Atomic Energy Organisation gave no further details, but Natanz governor RamezanAli Ferdowsi told the Tasnim news agency that a fire had broken out at the site.

Hours after the announcement on Thursday, IRNA published an editorial warning Iran’s arch-foes against hostile actions. Iran’s nuclear body has yet to provide an explanation for the cause of the incident, which came six days after an explosion near a military complex in Parchin area southeast of Tehran rocked the Iranian capital.

Authorities blamed that blast on “leaking gas tanks”. Parchin is suspected of having hosted conventional explosion tests with nuclear applications, which the Islamic republic denies.