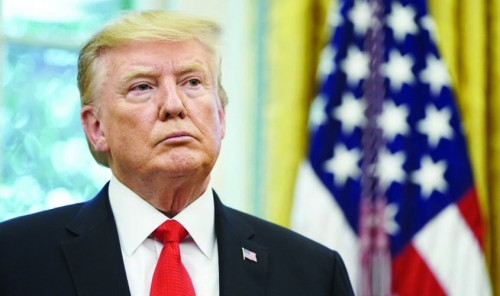 US President Donald Trump will stake his place in the national debate sweeping the country over police violence and racism following the death of George Floyd with an executive order on police reforms -- while taking care not to damage his friendly ties with law enforcement.

Trump has consistently backed the police against accusations that systemic racism is to blame for the deaths of Floyd and other African Americans at the hands of forces around the United States, usually during arrests that escalate abruptly into lethal violence. Last week, Trump, who faces a tough reelection fight in November, blamed a few “bad apples” for problems.

By contrast, Democrats and civil rights groups say that only full-scale rethinking of police culture, and sometimes a cut in police funding, will bring necessary change. With protesters taking to the streets in multiple cities and polls showing a shift in public opinion, Trump and his Republicans appear to be seeking not to be left behind.

Trump was due to sign what he said would be a “pretty comprehensive” executive order in a Rose Garden ceremony at the White House, with an emphasis on better training for police officers in their increasingly complex -- and at times highly dangerous -- job.

A first wave of unrest began more than three weeks ago, after the May 25 death of Floyd, who stopped breathing when an officer kneeled on his neck, having already handcuffed him during arrest for a minor offense in Minneapolis.

New tension erupted last week after the death in Atlanta, Georgia, of Rayshard Brooks, another African American whom police say was shot in the back as he ran away from arresting officers, after grabbing one of their tasers and aiming it at them. The president’s power over policing is limited because forces are largely controlled at a state and local level.

However, senior administration officials said Trump could use federal funding for police departments as an incentive to modernizing their hiring practices and their useof-force rules. “A lot of the police departments that have had problems are not using the most modern standards,” one official told reporters.

Leadership void? At the height of the anger on the streets, Trump struck a defiant tone, warning of anarchy and threatening to send federal troops to cities unable to control the crowds. The president clearly felt that played well with his base, a passionately loyal minority of the electorate that he hopes will power him to a win, however narrow, in November.

Trump regularly touts his support for police and is using the slogan “law and order” as a new pillar of his reelection campaign message. Trump’s lukewarm attempts to express empathy for the fear and powerlessness that many black Americans say they feel on a daily basis when encountering police left a vacuum that his Democratic opponent Joe Biden sought to fill by calling for honest national conversations on racism -- arguably the deepest, most painful subject in the country’s psyche.

In the Rose Garden, Trump will also be hosting police and the families of victims of police violence for what a senior official said would be “the discussion that the country needs to have... and hopefully bring some unification and some healing.”