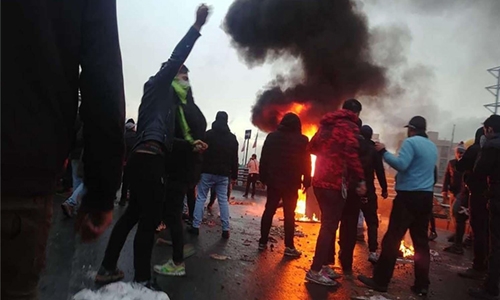 Amnesty International, citing “credible reports,” said yesterday it believes at least 106 people have been killed during protests in Iran over a rise in government-set gasoline prices. Iran’s government, which has not made nationwide numbers available for the toll of the unrest that began on Sunday, did not immediately respond to the report.

Amnesty added that it “believes that the real death toll may be much higher, with some reports suggesting as many as 200 have been killed.” Harvard scholar and Iranian affairs expert Dr Majid Rafizadeh told Arab News that the international community must push for an emergency meeting of the UN Security Council in order to address the brutal suppression of civilians.

Hard-liners in Iran meanwhile threatened violent protesters with executions by hanging as sporadic demonstrations still gripped pockets of the country.  It remains unclear how many people have been arrested, injured or killed in the protests that began Friday and quickly spread across at least 100 cities and towns in Iran.

Maryam Kazemi, a 29-year-old accountant in the southern Tehran suburb of Khaniabad, said that the hefty hike in fuel prices was “putting pressure on ordinary people.”