Something fishy: Fish with a “human face’ spotted in a pond! | THE DAILY TRIBUNE | KINGDOM OF BAHRAIN 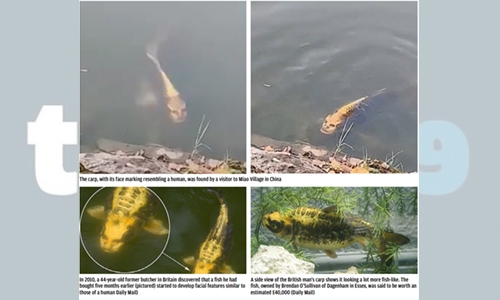 Something fishy: Fish with a “human face’ spotted in a pond!

A woman visiting a village in China got the shock of her life when she spotted a human-faced fish swimming and splashing around in a pond. She also shared a footage of the creature on Chinese microblogging site Weibo, which soon also started doing rounds on other social media platforms leaving netizens awestruck.

The 14-second-long footage, which equal parts bizarre and creepy, shows a carp sporting a man’s mouth, nose and eyes on its head swimming in a water body in a Chinese village. In the footage, the animal, with two black spots on its head resembling eyes and two stripes looking like a nose and a mouth, poking its head above the water at the edge of the lake. A voice in the footage, uploaded on Weibo, China’s equivalent to Twitter, can be heard saying: “This fish had turned into a fairy.”

Soon, it went viral, leaving several Weibo users surprised, with one saying it made them “feel creepy”. Shot in Miao Village in China, the video also went on to create a stir on other social media platforms. One Weibo user wrote: “This is scary”. “Who dares to eat it?” wrote another.

Not the first time!

This, however, is not the first time a creepy creature like this has surprised netizens. In 2016, a “humanoid carp”, considered lucky in Chinese culture, caused a stir online after it was captured by a primary school teacher in Wugang City in the Hunan province, central China. Qiu Xiaohua, who caught the fish said he had never seen anything like it in 20 years of fishing.

He had been planning to eat the fish, but instead opted to keep it in his home, a report said. Similar sighting were also reported in Taiwan and the UK. In 2010, a 44 year-old butcher from Essex reportedly found a similar “humanoid” carp, which was later valued at £40,000, said another report.

“It was astonishing. I could easily make out from the markings two eyes, a nose and a mouth. I thought I was suffering from sunstroke,” the fish’s owner Brendan O’Sullivan of Dagenham, Essex told Daily Mail. Residents in northeastern Taiwan’s Yilan Country also reported sighting a black-and-white carp with features resembling a human face.

How to live off the land... in a major US city