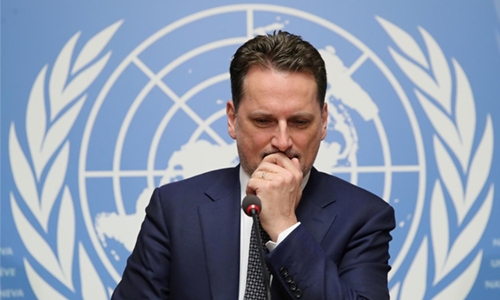 The head of the UN agency that aids Palestinian refugees has stepped aside until the end of an investigation into misconduct allegations, the agency said yesterday. Commissioner General Pierre Krahenbuhl stepped aside until a review of “management-related matters” at the agency was completed, the United Nations Relief and Works Agency for Palestine Refugees (UNRWA) said in a statement.

It gave no details of the substance of the allegations. The UN Secretary General appointed Christian Saunders as Officer-In-Charge for the interim period.

Saunders previously served as the agency’s acting deputy commissioner general. “Over the last few months, UNRWA has initiated an internal review of its governance, management and accountability functions, so as to ensure it practices the highest standards of professionalism, transparency and efficiency,” the UNRWA statement said.

Trump calls for ‘war’ on cartels