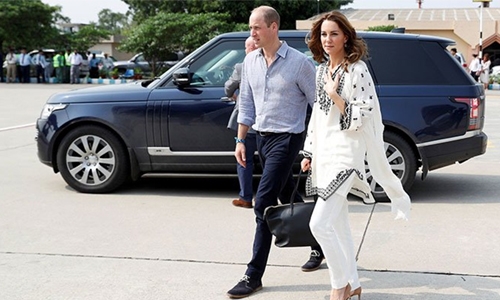 Britain’s Prince William and his wife Kate landed in Pakistan’s capital Islamabad on Friday, after turbulence forced the couple to stay overnight in Lahore in a change to their tightly-choreographed itinerary. On Thursday an RAF Voyager carrying the royals, who are on a four-day official visit to Pakistan, aborted landings in Islamabad and nearby Rawalpindi due to severe turbulence.

The couple stayed at Lahore’s Pearl Continental Hotel on Thursday evening, along with journalists, Kensington Palace staff and foreign ministry officials. Thursday’s aborted flight was described by a photographer on board as one of the most turbulent he had experienced in 25 years of regular flying, although the couple told reporters after returning to Lahore they were “fine”.

Friday’s flight passed off without incident. A planned visit to a Pakistan military post in the west of the country on Friday morning was cancelled, but the couple will visit an army canine training school in Islamabad before departing from the country later in the day. Kensington Palace had called the trip, the Cambridges’ first official visit to Pakistan, their “most complex” tour to date as the royals seek to boost ties between Britain and the second largest country in the Commonwealth.

They have spent their five-day tour promoting causes such as girls’ education, conservation and climate change awareness.