Professor, prisoner to face off in Tunisia | THE DAILY TRIBUNE | KINGDOM OF BAHRAIN 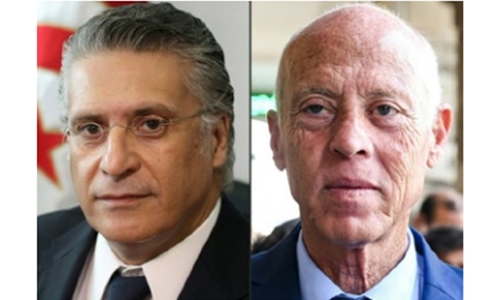 Professor, prisoner to face off in Tunisia

Official results in Tunisia’s presidential election confirmed yesterday a duel in the second round of voting between law professor Kais Saied and imprisoned media mogul Nabil Karoui. Saied led the first round with 18.4 per cent of the vote, and is set to challenge Karoui in polls next month after he earned 15.6pc, according to the electoral commission (ISIE). Sunday’s election was the country’s second free vote for head of state since the its 2011 uprising.

The result is a major upset for Tunisia’s political establishment, in place since the fall of dictator Zine El Abidine Ben Ali eight years ago after the mass protests. The Islamist-inspired Ennahdha party, a main force in parliament, came third with almost 12.9pc of the vote for its first-ever presidential candidate Abdelfattah Mourou. Shortly before the official results were announced, Ennahdha congratulated the two winners, implicitly dispelling rumours that Karoui would be disqualified over alleged violations during his campaign. Any such disqualification would have seen Mourou qualify for the final runoff.

ISIE has said it is investigating alleged electoral violations, including campaigning on behalf of Karoui by Nessma TV, founded by the media mogul. “We are analysing” complaints, ISIE spokesman Hasna Ben Slimane said. “But to unseat a candidate, there must be a valid and solid reason” to believe there was a violation, he said. Observers from the European Union said the first round has been “transparent”.

But it called for the candidates to have the “same opportunities” to campaign, in an apparent allusion to Karoui. Depending on potential appeals, the second round could be organised for October 6, the same day as legislative elections, or on October 13, ISIE said. The two candidates -- though very different -- have drawn on the same “anti-system” sentiment among the electorate, spurred by exasperation with the status quo.