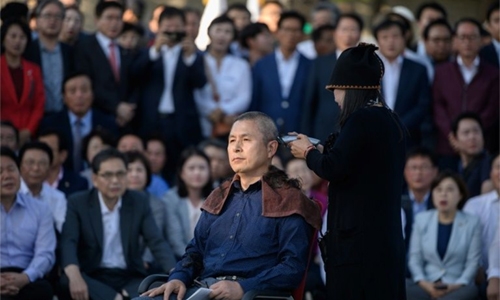 South Korea’s main opposition party leader shaved his head yesterday to protest against the controversial appointment of a new justice minister despite allegations of corruption against his family. Law professor Cho Kuk began his duties as the justice minister last Monday as state prosecutors carry out a probe into his daughter’s schooling and an investment in a private equity fund suspected of dubious operations.

The appointment infuriated opposition lawmakers and created an even sharper divide in parliament. Yesterday, Hwang Kyo-ahn -- the main opposition Liberty Korea Party leader -- said he would shave his head to urge the resignation of “criminal Cho Kuk”.

A stern-looking Hwang arrived outside the presidential Blue House and was shorn of his neatly parted black hair as the South Korean anthem blared in the background. “I’m here to pledge my determination by shaving my head,” Hwang told the crowd. “I will not step back.”