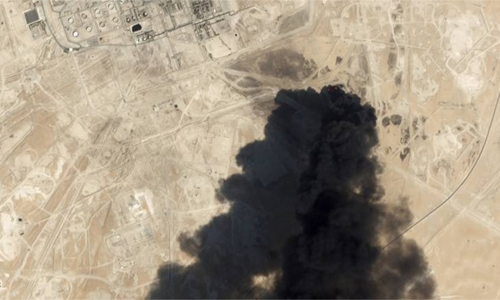 An American senator has called for Washington to consider an attack on Iranian oil facilities as pressure grows in the US for a firm response to the Saudi Aramco strikes. Secretary of State Mike Pompeo blamed Iran for the drone attacks yesterday against the Abqaiq oil processing plant and the Khurais oil field.

He also suggested that unlike previous drone and missile attacks on the Kingdom, this one may not have been launched from Yemen by the Iran-backed Houthis. Reports have said that the attack may have originated in Iraq where Iran also holds sway over a large number of powerful militias. “It is now time for the US to put on the table an attack on Iranian oil refineries if they continue their provocations or increase nuclear enrichment,” Lindsey Graham, a Republican senator close to Donald Trump, said on Twitter.

“Iran will not stop their misbehaviour until the consequences become more real, like attacking their refineries, which will break the regime’s back.” Iran on Sunday denied it was behind the attack, but the Yemeni Houthi militia backed by Tehran, claimed they had launched them.  The White House on Sunday did not rule out a potential meeting between President Donald Trump and Iranian President Hassan Rouhani, even after Washington accused Iran of being behind drone attacks on Saudi oil facilities.

White House adviser Kellyanne Conway said the attacks “did not help” prospects for a meeting between Trump and Iranian President Hassan Rouhani during the United Nations General Assembly this month but she left open the possibility it could happen. “You’re not helping your case much,” by attacking Saudi Arabia, civilian areas and critical infrastructure that affects global energy markets.” Conway told the Fox News Sunday programme.

The Trump administration’s sanctions and “maximum pressure” campaign on Iran over its nuclear and ballistic missile programme will continue whether or not the two leaders meet, she added. UK foreign minister Dominic Raab said the attack was a “reckless attempt to damage regional security and disrupt global oil supplies.” The European Union warned of a “real threat to regional security” in the Middle East.