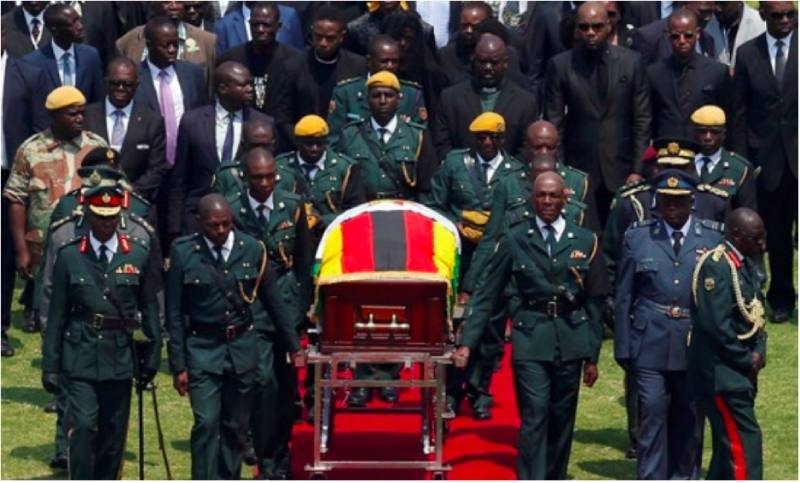 Zimbabwe gave former leader Robert Mugabe a state funeral yesterday with African leaders paying tribute to a man they lauded as a liberation hero but whose 37-year rule was defined by repression and economic turmoil. Mugabe, who died in Singapore last week aged 95, left Zimbabwe deeply divided over his legacy with his country still struggling with high inflation and shortages of goods after decades of crisis.

He died on an overseas medical trip almost two years after former army loyalists forced him out in 2017, following a power struggle over what was widely perceived as a bid to position his wife Grace as his successor. Former and current African leaders, including South Africa’s Cyril Ramaphosa and Kenya’s Uhuru Kenyatta, arrived in crowds chanting and drumming liberation songs at the less than half-filled 60,000-seat national stadium in Harare.

Mugabe’s casket, draped in the green, black, gold and red Zimbabwe flag, was marched slowly into the stadium, accompanied by a military band and an escort of officers. His wife Grace, in a black veil, and family followed behind. African leaders and officials from Cuba, Russia, and China all praised Mugabe as a pan-African hero for his past as a colonial-era guerrilla leader.

“We honour and remember our African icon. He had many allies and followers... Our motherland is in tears,” Zimbabwe President Emmerson Mnangagwa said. South African leader Ramaphosa’s speech was briefly interrupted by jeers and whistles from the crowds until he apologized for recent xenophobic attacks on African migrants, including Zimbabweans, in Johannesburg.