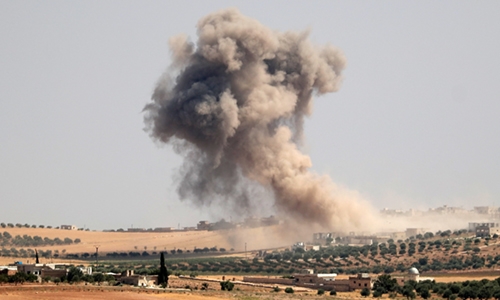 Turkey warned Damascus yesterday “not to play with fire” a day after a Turkish military convoy was cut off by an air strike in northwest Syria. “The regime should not play with fire... As we have previously said, we will do whatever is necessary to ensure the security of our soldiers and observation posts,” Foreign Minister Mevlut Cavusoglu told reporters in Ankara. But, he added, “we hope it does not reach that point”.

The Turkish military convoy of around 50 armoured vehicles had entered the Idlib province on Monday heading towards the key town of Khan Sheikhun, where Russian-supported regime forces are fighting to retake the area from jihadists and rebels. The Turkish defence ministry said that an air strike hit, killing three civilians and wounding 12.

But the Syrian Observatory for Human Rights, a UK-based monitor, said a Russian air strike hit a rebel vehicle leading the convoy just outside the town of Maaret al-Noman, 15 kilometres (nine miles) north of Khan Sheikhun. The strike killed a Turkish-backed fighter from the Faylaq al-Sham group and two other opposition fighters, the Observatory said. The convoy angered Damascus, who accused Ankara of providing support to “terrorists”.

Cavusoglu said the convoy’s “duty was to ensure the safety of a Turkish observation post”, adding that Ankara had “no intention to move our ninth observation post”. The post is one of 12 in Idlib, the last bastion of jihadist forces, established as part of a Russia-Turkey buffer zone deal to prevent a large-scale offensive in the region. Despite this agreement, the Syrian regime and Russia have increased their attacks in Idlib since late April. Turkish officials were in talks over the incident with their Russian counterparts, Cavusoglu said.

13 Chinese tourists killed as bus plunges into ravine in Laos