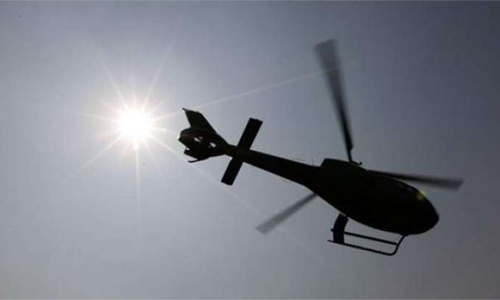 The Greek island of Poros was without electricity yesterday after a private helicopter crashed through power cables and into the sea, a local official said.

“There was a great flash and the helicopter’s fuel exploded,” deputy Poros mayor Yiorgos Koutouzis told state TV ERT. “It hit power cables around a hundred metres from the sea, the island is now without electricity,” he said. Coastguard spokesman Nikos Lagadianos said there were believed to be three people on board -- a Greek pilot and two foreign passengers.

The helicopter fell shortly after takeoff from Galata, the nearest coastal village on the mainland facing Poros, 170 kilometres (105 miles) southwest of Athens. The coastguard said search crews, including six of its vessels, divers and a rescue helicopter, had found the wreckage and were searching for survivors. Poros is a small picturesque island off the eastern coast of the Peloponnese that is popular with holidaymakers.