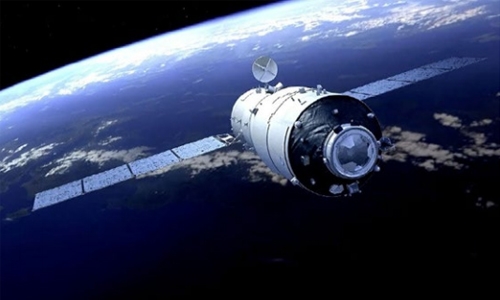 A small amount of the spacecraft’s debris fell into a “predetermined safe sea area in the South Pacific”, according to the agency.  Xinhua said the space lab has worked in orbit for over 1,000 days, much longer than its 2-year designed lifespan. Zhou Jianping, chief designer of China’s manned space programme, told Xinhua that the controlled re-entry marked the successful completion of all the tasks in the space lab phase of the programme.

Efforts are now being made to step up preparations for constructing China’s space station, Xinhua said, citing CMSA. The controlled return represents a success in China’s military-run space programme, which has encountered some glitches on its way. A space lab dubbed Tiangong-1 disintegrated as it plunged back to Earth in April 2018, two years after it ceased functioning. Tiangong-1 was placed in orbit in September 2011 to serve as a testing ground for China’s efforts to build its own space station by 2022, but ceased functioning in 2016.

Chinese authorities denied that the lab was out of control. The International Space Station -- a collaboration between the United States, Russia, Canada, Europe and Japan -- has been in operation since 1998 but is due to be retired in 2024. Beijing will then have the only space station in orbit, though it will be much smaller than the ISS which weighs 400 tonnes and is as large as a football pitch.

China in 2003 also became the third country able to launch humans into space, following the former Soviet Union and the United States. Beijing sees its space programme as symbolising the country’s progress and a marker of its rising global stature.