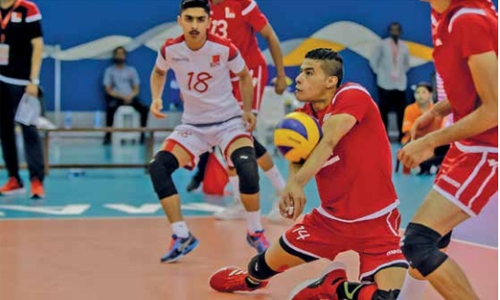 A sensational Bahrain enjoyed a dream start to the FIVB Volleyball Men’s U21 World Championship 2019 yesterday night following a thrilling victory over South American giants Puerto Rico. Boosted by the cheers and beating drums of a near-capacity local crowd at the Bahrain Volleyball Association arena in Shaikh Isa Sports City, the tournament hosts stunned their heavily favoured rivals in straight sets 25-18, 25-14, 25-20. It was the perfect beginning to the competition for the home side, who are playing in Pool A in the first round.

They are now in prime position to make history and qualify for the second phase with at least one more win in their next two games. Also taking big victories yesterday were Brazil, Korea and Russia. The Brazilians beat defending champions Poland, the Koreans stunned world number one-ranked Cuba, and Russia overcame European rivals the Czech Republic. Elsewhere, Argentina beat Egypt, while China, Iran and Italy all claimed convincing victories in three sets. Asian sides China and Iran beat their African counterparts Morocco and Tunisia, respectively, while Italy ousted Canada.

Tournament action continues today with the second day of the first round. Matches begin from 11.30am and continue until the night. All are welcome to attend. Entrance is free of charge. In Bahrain’s resounding win, the hosts were in inspired form and they never wavered until the very last point. Hasan Mohamed and Mahmood Abdulhussain had 12 points apiece in the win, while Sayed Mohamed Alabbar contributed seven points. Mohamed Jasim and Hasan Haider added six points each, while Mohamed Haroona rounded out the scorers with one point.

Sebastian Negron led Puerto Rico with 12 points. Following the match, Bahrain team director Abdulla Almahroos commented: “This is a good start. Of course, the boys have pressure being the home team. “Tomorrow, they play Morocco and we need to win this game to stay in contention for the next round. This gives us a little added pressure, but in the World Cup every win is important. Step by step, hopefully we can go to the second round.” Bahrain’s clash with Morocco is scheduled to begin no earlier than 7pm. Brazil outplayed title holders Poland 3-1 (25-23, 23-25, 25-18, 25-19) in an exciting Pool D clash that lasted close to two hours. The Brazilians had a balanced attack in their win, with five players scoring 10 points or more.

Victor Aleksander Cardoso finished with 14 to lead the way, while Edson Junio Souza Da Paixao had 12 and Lucas Augusto Figueiredo 11. Angellus Costa Da Silva and Guilherme Voss Messias Dos Santos each scored 10 points. Poland’s Bartosz Firszt led his team in the loss with 16 points. Brazil coach Giovane Gavio said after their triumph: “For the first match, we always tend to be a little bit nervous but we played very well in serve. I think we put pressure on them with this, and also on defence. We knew how to wait for the best moment to close out and win the points. We played well today against Poland, which is one of the most important teams in the world.”

Korea had a hard-fought 3-1 (27-25, 17-25, 25-22, 27-25) win over Cuba to make their presence felt early on in the competition. Korea captain Donghyeok Im was in top form, scoring 21 points to lead the victors. Jihan Kim added 13 in the win. After the match, Donghyeok commented: “They (Cuba) are much taller than us, but I see they have their own weaknesses. We also have our own but we don’t think about those. We focused on their weaknesses.” Russia defeated the Czech Republic in what was a re-match of the final of the European Championship final from last year. The two teams split the first two sets but then Russia made their adjustments and managed to close out the match 3-1 (25-22, 18-25, 25-21, 25-13).

Russia’s Maksim Sapozhhkov led the winners with 24 points while Marek Sotola paced his team with 22 points in the loss. With the victory, Russia head coach Nozdrin Andrey said: “It is very important to win the first match in any tournament, especially in the world championship. We were very nervous, but we overcame our emotion today. “The reception for our team was very good, especially in the last sets. The main thing is that we win and the first match is out of the way and now we start our preparations for our next match.” Meanwhile, Iran had a dominant straight sets (25-13, 25-19, 25-19) victory over Tunisia in Pool ‘C’.

Amirhossein Esfandiar was the top scorer for the Iranians with 11 points, while Mehran Feyzemamdoust contributed nine. Yassine Abdelhadi led Tunisia also with 11 points. Iran head coach Ataei Nouri Behrouz said: “We tried to have good service and good blocking, and we controlled the match. These thee things were very important for us to win. “We want to think of our games one by one; every match we must win. We know we are a powerful team and a strong team, and we have a long way to reach our target. But now we must go one by one as this is a very difficult tournament.”