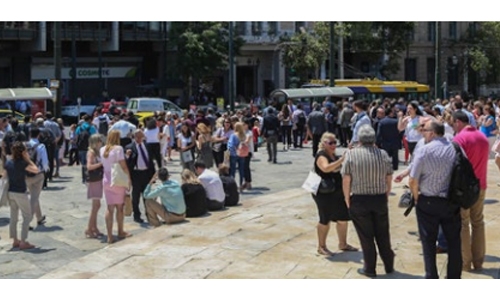 A strong 5.1-magnitude earthquake jolted Athens on Friday, knocking out phone connections, damaging buildings and causing power outages, as panicked residents rushed into the streets. State TV ERT reported that at least two people were lightly hurt -- a pregnant tourist and a young boy -- and at least two abandoned buildings in the capital collapsed, while several more suffered damage.

“It was a very intense quake, we were terrified, everyone started coming out (of the building),” a young woman named Katerina told AFP outside the six-storey cosmetics store where she works. The epicentre of the shallow quake was northwest of Athens, close to where a 5.9-magnitude quake in September 1999 left 143 people dead in and around the capital.

Friday’s emergency was the second in just over a week for the new conservative administration of Prime Minister Kyriakos Mitsotakis, who took office after a July 7 election. In the city centre, the marble cupola cross of a historic 19th century church came loose and shattered onto the street below. Another Athens church had its cupola cross snapped by the tremor, and a disused cargo conveyor belt at the port of Piraeus collapsed, TV footage showed.

The culture ministry said the pregnant tourist was visiting the National Archaeological Museum and was struck by another visitor rushing for the exit.  She was hospitalised as a precaution, the ministry said. The boy was struck by a falling chimney, ERT said. News channels broadcast images sent in by viewers which also showed parked cars in central Athens damaged by fallen masonry. Cracks also appeared in some walls in Greece’s 170-year-old parliament building.

“It was more like an explosion,” another woman told ERT on the city’s central Syntagma Square.“We were all very afraid, so we’ll stay here for a couple of hours.” Government spokesman Stelios Petsas said on television that there were no reports of serious injuries, while a small number of other buildings had suffered minor damage.

Petsas added that phone networks had become “overcharged” by the sheer number of users calling to check up on friends and family. SKAI TV said there were 20,000 calls per second, more than on New Year’s Eve.