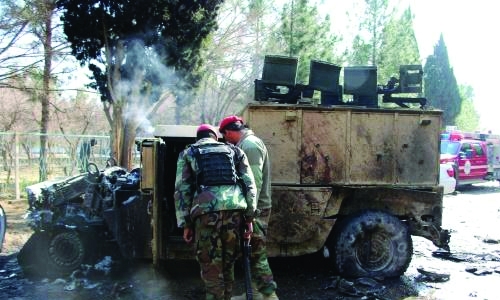 Kandahar : At least 11 civilians were killed when a roadside bomb ripped through their vehicle in the restive southern Afghan province of Helmand, officials said Saturday.

The blast occurred when the passengers were travelling from remote Nawa district to the provincial capital Lashkar Gah on Friday, government spokesman Omar Zhwak told AFP.

"The blast was powerful and all those on board the van were killed," Zhwak said, adding that officials were trying to determine whether any women or children were among the victims.

Helmand police chief Agha Noor Kentoz blamed the Taliban for the blast, saying the road had been mined to target Afghan security forces who frequently use it.

The Taliban were not immediately reachable for comment, but roadside bombs have been the militants' weapon of choice in their war against foreign and Afghan security forces.

Most of Helmand, the biggest poppy-growing province, is already estimated to be under Taliban control, with the capital Lashkar Gah -- one of the last government-held enclaves -- also at the risk of falling to the Taliban's repeated ferocious assaults.

Around 11,500 civilians -- one third of them children -- were killed or wounded in Afghanistan in 2016, according to the United Nations, the highest recorded by the world body.