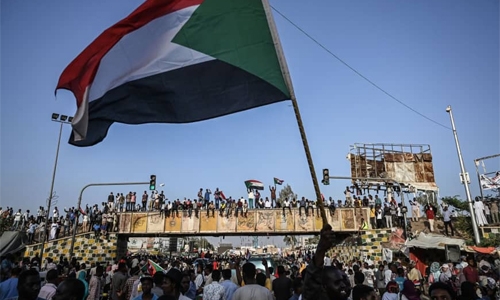 The grief on Umm Babikir’s face is raw, angry, and deep. In her elegant and spacious home in Khartoum, she gestures at a large photograph of her son, Dr Babikir Abdul Hameed. “Look at that beautiful smile on his face, he was everything to me,” she says, barely suppressing her tears. “My husband works in the Gulf and Babikir was my only son. He did everything for me.” On Jan. 17, Babikir was with the protesters in Khartoum, tending to the injured. He emerged from a small tent where he had been treating civilians. Raising his hands high to the soldiers confronting the protesters, he told them he was a doctor.

“We know,” they shouted back, and shot him several times in the chest at point-blank range. He died. He was 27. Umm Babikir (her name is Sharifa Award) tells me she had a mother’s instinct that something would happen to her son. “I begged him not to go out that day and tried to think of a million reasons to dissuade him. But he wanted to be part of the revolution.” Babikir was one of nearly 100 people who died in the protests that began in December last year.

There was much rejoicing on the streets of Khartoum after the fall of Omar Al-Bashir, but it could have gone horribly wrong; if Bashir’s orders had been obeyed, there would have been a bloodbath. At the new presidential palace in Khartoum, Lt. Gen. Abdel Fattah Abdelrahman Burhan, head of the transitional military council that took over when Bashir was ousted, tells me Bashir asked him to order the army to open fire on the protesters at the height of the demonstrations. He refused, along with Hemedti, the commander of the Rapid Support Forces. Burhan personally told Bashir it was time for him to step down.

The revolution in Sudan has catapulted its people into the world’s headlines and their extreme courage, persistence, and determination have rightly been praised. But the country has been here before; popular protests have been instrumental in getting rid of army rule in the past. There was a civilian government at independence from Britain in 1956, but just two years later Gen. Ibrahim Abboud mounted a coup and ruled until demonstrations helped remove him in 1964. Then in 1969 Col. Gaafar Nimeiry seized power and stayed until 1985 when he too was partly dislodged by massive street protests.

After a year of transition under Gen. Abdel Rahman Swar Al-Dahab, there were elections and a civilian government in 1986. But that only lasted three years until Bashir’s coup in 1989. So history shows that, although the removal of Bashir from power after 30 years is an extraordinary achievement, it is only the first step. The future success of the revolution depends on what happens next. The umbrella movement that dislodged Bashir is known as the Forces for Freedom and Change (FCC). It is made up of disparate elements — the Sudanese Professionals Association, which led the protests, as well as students, civil society, activists and political parties.

There are secular and Islamist groups in the coalition, women’s rights activists and conservatives, who must all reconcile their competing visions for a new Sudan. The FCC is trying to chart Sudan’s future, along with the military. Negotiations have become stuck over the composition of a future supreme council and the division of power on it. This is the body that will guide the transition for an as yet unspecified period of time. The vigilant FCC are quite right to maintain pressure on the military to ensure that civilians are in the driving seat.

So the stakes are high. Yes, the army can finally be driven out of Sudan’s politics, but this depends not only on the generals keeping their promise that they are not hungry for power, but also civilians managing the transition successfully to prevent history from repeating itself. Khartoum is where the Blue and White Niles meet. Rivers with different sources and separate courses unite and form a single and powerful waterway. I hope that, in a similar way, those negotiating the new Sudan can combine their strength and emerge stronger together. Otherwise, Dr Babikir, and the scores like him, will have died in vain.

US faces a world of tough decisions