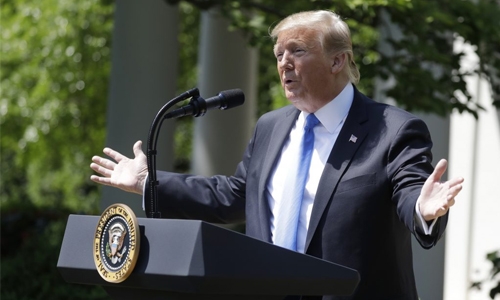 US faces a world of tough decisions

The hardline policies of US President Donald Trump’s administration on Venezuela and Iran are becoming clearer, with the White House now openly talking about military force as an option. The coming days may thus see a shift in US attitudes and measures against the two countries, unless peaceful transition takes place in Caracas, and Tehran decides that its interests require co-operation, rather than escalation in response to Washington’s oil embargo.

Another tough stance emerging from Washington relates to the potential designation of the Muslim Brotherhood as a terror group. Already, this has antagonised Turkey and could lead President Recep Tayyip Erdogan to engage in further grandstanding, for example by supporting his friend in Caracas, President Nicolas Maduro. Maduro, whose regime has managed to impoverish what was once the region’s richest nation also counts among his friends Bashar Al Assad, the Iranian regime and the leaders of Bolivia, Nicaragua and Cuba.

The Colombian president Ivan Duque has called on Venezuela’s armed forces to join the opposition leader Juan Guaido, who is backed by most South American governments, as well as the US and other major western nations. Calling the army to back the civilian movement led by Guaido is practical, because moving from authoritarianism to civil rule now seems impossible without it. This has been the case in Algeria, and in Libya, where a military settlement seems a prerequisite, as well as Sudan, where there is now a valuable opportunity to achieve an accord between civilians and military.

In the folds of all these developments, especially as it relates to Venezuela, lies the strained relationship between Washington and Moscow, as the two powers exchange accusations and warnings. Inside the US, meanwhile, the presidential campaigns have started in earnest, amid deep divisions and structural weakness in the Democratic Party. In this febrile climate, there has been a lot of posturing about foreign policy issues, including Venezuela, the Muslim Brotherhood and Yemen, which former vice president Joe Biden has used to attack Trump.

In truth, Biden himself backed the rise of the Muslim Brotherhood to power and supported its hijacking of the Arab uprisings, not to mention having called for the partition of Iraq. According to informed sources, US-Iranian escalation could come to a head this week. Trump intends to announce strict measures against countries that violate the US oil embargo on Iran by continuing to purchase Iranian crude after the expiry of sanctions waivers. According to sources, he will also issue a stern warning to Tehran not to take any retaliatory measures, especially in the Strait of Hormuz or against Saudi and other Arab Gulf oil exports.

The same sources say that there is a strong Iranian inclination to retaliate against US oil restrictions, with preparations being made to hit pipelines that feed into Saudi refineries. Despite these gloomy predictions, there remain two views on what is about to happen. One is that Tehran will never escalate, because it is aware that Trump will not hesitate to take military action against it. The other, however, is that Trump’s measures will lead to the collapse of the Iranian regime, so the hardliners will not hesitate to act. In the past, Washington extended security cover to Lebanon, making it clear that the failure of this small country was a red line.

According to officials, the US has run out of patience. Now, they say, there is a real chance the US may end its security guarantees if the Lebanese do not stand up to Hezbollah and stop it from putting Iranian interests ahead of those of Lebanon itself. Meanwhile, some circles in New York and Washington are raising questions about the prospects of Trump opening the door to military action in Iran and Venezuela. The US is divided here too. Democrats are automatically opposed to everything that Trump decides, and they will be placing their bets on popular opposition to any military involvement. On Venezuela, the Trump administration has a coherent policy.

Secretary of State Mike Pompeo, National Security Adviser John Bolton, Special Envoy Elliott Abrams, and Vice President Mike Pence all agree on being robust, even if that requires military intervention for a limited transitional period, in order to secure civilian rule with the help of the country’s armed forces. Pompeo and Bolton have both accused Moscow of meddling in Venezuela. They say that the Kremlin is resisting transition in Caracas and has convinced Maduro not to leave for Cuba. Russia’s foreign minister, Sergei Lavrov, has said that Washington’s interference in Venezuelan affairs violates international law and that such “aggressive moves” will have serious ramifications.

Pompeo has said that his boss prefers peaceful transition but that he was “clear and firm” that military action remains an option. At present, it seems that peaceful transition is unlikely, unless the Venezuelan military overthrows Maduro, or Maduro’s friends abandon him and convince him to step down. However, it is the Kremlin that matters most here. If Russian President Vladimir Putin decides that Venezuela is an asset – given its strategic location and vast oil reserves – worth risking relations with Washington for, then the crisis is set to escalate.

To some extent, it seems that the solution is in the hands of the Venezuelan military, which can side with the people against Maduro and back Guaido as an interim president. Some have accused the Trump administration of supporting military takeovers around the world, including in Algeria, Libya, and Sudan.

But the Obama administration supported Islamist takeovers, based on the Turkish model, and backed the Muslim Brotherhood, despite its rejection of the separation of powers and its quest to impose its will on the constitution and state. If the choice is between this and temporary military rule, it would seem that temporary military rule is the lesser evil.