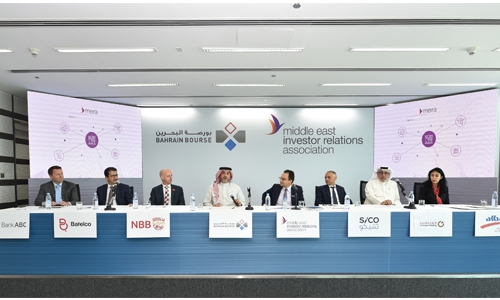 Batelco said it has signed an agreement to become one of the founding partners of the Bahrain Chapter of the Middle East Investor Relations Association (MEIRA). MEIRA has officially launched a new chapter in Bahrain, to further develop and enhance best practices in Investor Relations (IR) across Bahrain. The MEIRA Bahrain Chapter founding members include ALBA, Bank ABC, National Bank of Bahrain, SICO Bank, Ithmaar Holding as well as Batelco.

Bahrain Bourse will lead the MEIRA Bahrain Chapter. The signing ceremony took place at the Bahrain Bourse premises with Batelco Chief Financial Officer Faisal Qamhiyah singing on behalf of Batelco. The ceremony was followed by an IR seminar attended by more than 30 representatives from local listed companies. Commenting on the new chapter, Andrew Tarbuck, MEIRA Chairman said: “We look forward to collaborating with our Chapter Members and with Bahrain Bourse as the Chapter Head to increase the effectiveness and quality of the IR function among the organisations in the Kingdom through our wide range of activities and training programmes.”

Faisal Qamhiyah, Batelco Chief Financial Officer added, “This is a great opportunity for Batelco to be part of this initiative to promote and raise awareness relating to investor relations’ best practices across the Kingdom of Bahrain. Shaikh Khalifa Bin Ebrahim Al Khalifa, Chief Executive Officer of Bahrain Bourse, commented: “The establishment of the Bahrain MEIRA Chapter sets the ground for establishing a solid network of IR professionals in the Kingdom of Bahrain, and will certainly help in advancing the IR function and promoting international best practices among listed companies in the capital market.”