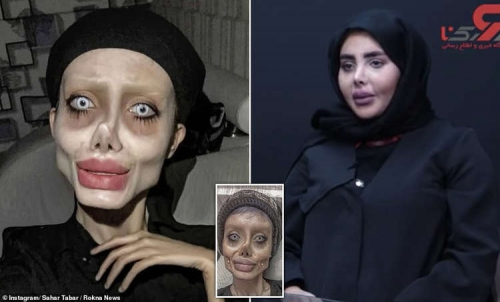 A ‘Zombie’ Angelina Jolie lookalike, who’s known for posting spooky Instagram pictures, has finally revealed her real face on Iranian TV after being released from prison.

Sahar Tabar, contrary to popular belief, looks nothing like her ‘zombie’ alter ego. Many people believed she underwent cosmetic surgery to achieve her demonic appearance, but she revealed herself on Iranian TV channel Rokna.

Tabar, 21, whose real name is Fatemeh Khishvand, from Tehran, had originally been jailed for obscenity and insulting the hijab, according to the Iran Human Rights News Agency.

She was arrested in October 2019 for ‘corruption’ and ‘blasphemy’ and sentenced to ten years in prison. But the media star was recently released after serving only 14 months, as reported by activist Masih Alinejad.

‘What you saw on Instagram was the computer effects I used to create the image,’ she was quoted as saying, according to Lad Bible.