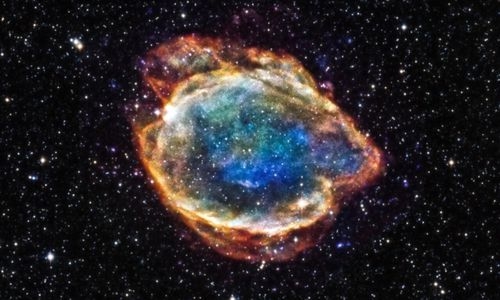 Record measurement of universe suggests 'something is fishy'

The most precise measurements ever made of the universe's composition and how fast it is expanding suggest "something is fishy" in our understanding of the cosmos, the astrophysicist who led the research said yesterday.

The comprehensive new study published in The Astrophysical Journal further confirmed that there is a significant discrepancy between two different ways to estimate the speed at which the universe is expanding.

The study said that around five percent of the universe is made up of what we might think of as normal matter, while the rest is dark matter and dark energy -- both of which remain shrouded in mystery.

Dark energy, a hypothetical force causing the universe to expand at an ever-increasing rate, makes up 66.2 percent of the cosmos, according to the study published in The Astrophysical Journal.

The remaining 33.8%t is a combination of matter and dark matter, which is also unknown but may consist of some as-yet-undiscovered subatomic particle.

To arrive at the most precise limits yet put on what our universe is made up of, an international team of researchers observed exploding stars called supernovae.

They analysed the light from 1,550 different supernovae, ranging from close to home to more than 10 billion lights year away, back when the universe was a quarter of its current age.

"We can compare them and see how the universe is behaving and evolving over time," said Dillon Brout of the Harvard– Smithsonian Center for Astrophysics and lead author of the study, called Pantheon+.

The study updated the data from the Pantheon project a couple of years ago, stamping out possible problems and nailing down more precise calculations.

“This latest Pantheon+ analysis is a culmination of more than two decades’ worth of diligent efforts by observers and theorists worldwide in deciphering the essence of the cosmos,” US astrophysicist Adam Reiss, 2011’s physics Nobel winner, said in a statement.

It was by observing supernovae back in the late 1990s that Reiss and other scientists discovered the universe was not only expanding but also doing so at an increasing rate, meaning galaxies are racing away from each other.

“It was like if you threw a ball up, and instead of the ball coming down, it shot up and kept accelerating,” Brout said of the surprise of that discovery.

Pantheon+ also pooled data with the SH0ES supernova collaboration to find what is believed to be the most accurate measurement for how rapidly the universe is expanding.

They estimated the universe is currently expanding 73.4 kilometres a second every megaparsec, or 3.26 million light years.

That works out to be around 255,000 kilometres (160,000 miles) per hour, according to a Harvard-Smithsonian statement.

But there’s a problem.

Measuring cosmic microwave background radiation, which can look much farther back in time to around 300,000 years after the Big Bang, suggests the universe is expanding at a significantly slower rate -- around 67 kilometres per megaparsec.

This discrepancy has been called the Hubble tension, after US astronomer Edwin Hubble.

The Pantheon+ results have raised the certainty of the Hubble tension above what is known as the five sigma threshold, which means the discrepancy “can no longer be attributed to luck”, Brout said.

“It certainly indicates that potentially something is fishy with our understanding of the universe,” Brout said.

Some possible, unverified theories for the discrepancy could include another kind of dark energy in the very early universe, primordial magnetic fields, or even that the Milky Way sits in a cosmic void, potentially slowing it down.

But for now, Brout said that “we, as scientists thrive on not understanding everything. “There’s still potentially a major revolution in our understanding, coming potentially in our lifetimes,” he added.