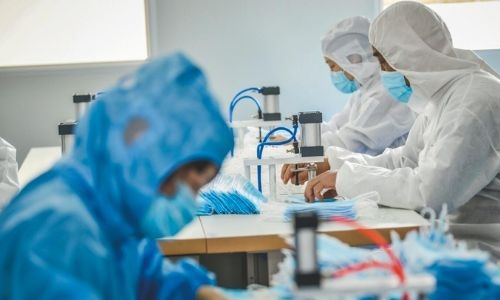 People are 1,000 times more likely to get Covid-19 from the airborne viral particles they breathe than from the surfaces they touch, according to a study. The researchers from the University of Michigan (U-M) in the US collected air and surface samples during an environmental surveillance programme from August 2020 until April 2021 on their campus.

“The risk of surface transmission was 1,000 times lower than airborne transmission,” said Chuanwu Xi, a professor at U-M’s School of Public Health. “We also found that the total case number on campus was significantly higher in weeks with positive environmental samples than in non-positive weeks,” Xi said in a statement.

For air samples, Xi and colleagues used wetted wall cyclone bioaerosol samplers, which suck in large volumes of air using a pump and capture any virus particles in the air. For surfaces, researchers used swab kits. Overall, between August 2020 and April 2021, the researchers collected 256 air samples and 517 surface samples.

They found that positivity rates were 1.6 per cent and 1.4 per cent, respectively, and that probability for infection was about 1 per 100 exposures to SARS-CoV-2 aerosols through inhalation and as high as 1 in 100,000 from contaminated surfaces in simulated scenarios.

The researchers noted that because the study was conducted during lockdowns on a college campus, no samples were collected in spaces with large gatherings of people and some samples were only collected when few people were present.

“Our results are a valuable addition to our understanding of infectious diseases and mitigation efforts during this pandemic and can help prepare us for future outbreaks of respiratory diseases with similar transmission mechanisms,” said Rick Neitzel, a professor at U-M’s School of Public Health.

“This is another layer of sophistication to evaluate major routes of transmission and to identify physical spaces where risks are higher and control measures in such space are essential and more effective to reduce the spread of the virus,” Neitzel added.