Vin Diesel walks Paul Walker's daughter down the aisle at her wedding, pic surfaces | THE DAILY TRIBUNE | KINGDOM OF BAHRAIN 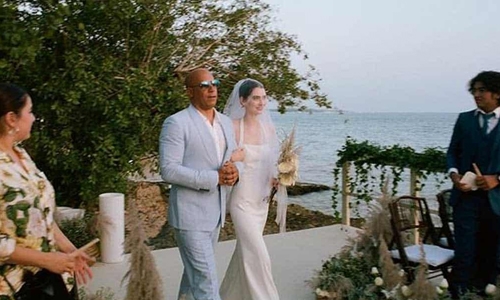 Late Fast and Furious actor Paul Walker’s daughter Meadow Walker is now married to actor Louis Thornton-Allan. She walked down the aisle with Vin Diesel, who is her godfather.

Meadow took to Instagram to share a video of the beachside wedding celebration. She posted a black and white video and captioned it, "We're married." The video showed Meadow walking around in her bridal gown and enjoying the car ride with the groom. She is also seen greeting her godfather – Fast & Furious actor Vin Diesel and his family as they arrive at the venue.

On the same day, Vin shared a fan art of him looking at Paul Walker on his Instagram handle. More pictures of Meadow and Louis enjoying themselves at the after-party were also shared on her Instagram account.

Fans got emotional on seeing Vin take on Paul's role at the wedding. “Paul Walker's daughter Meadow got married and most likely it was Vin Diesel who took her down the aisle for her calling and considering him her second father, and Jordana she calls her second mother, oh my god I love them so much,” wrote one. “Vin Diesel walking Meadow Walker down the aisle at her wedding in place of Paul has me shaking and crying right now,” wrote another.

Paul Walker played Brian O'Connor while Vin Diesel continues to play Dominic Toretto in the Fast and Furious franchise. Paul Walker died in a car crash in 2013 at the age of 40 when Meadow was just 15 years old.

Vin Diesel is very close to Meadow and has even discussed the possibility of her appearing in an upcoming installment of the franchise. "I would not count anything out," Diesel told E!'s Daily Pop in June. "Let me just, without giving you all of the secrets of Fast 10, let's just say nothing's ruled out," he added at the time.

"She's the first person on Father's Day to wish me Happy Father's Day," he told Extra in June. "To see her with my children is one of the most beautiful things. There are moments when I see her playing with (his 6-year-old daughter) Pauline and it hits me so deep 'cause I can only imagine what my brother sees when he sees that," he added.