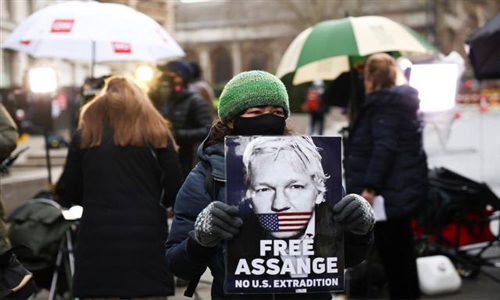 UK judge rules WikiLeaks' Assange should not be extradited to US

WikiLeaks founder Julian Assange cannot be legally extradited to the US to face espionage charges over the publication of secret American military documents, a British court ruled Monday.

District Judge Vanessa Baraitser delivered her decision at London's Old Bailey court, in a case that has pitted national security against freedom of expression. A crowd of reporters gathered outside as a small group of supporters chanted "Free Julian Assange."

Lawyers acting on behalf of the US government have already said they will appeal the decision.

If successful Assange, 49, could still be transferred to the US, where he faces a maximum of 175 years in prison if convicted on 17 espionage charges and one charge of computer misuse.

Referring to Assange's defence team's argument that the UK's action against him is political and therefore incompatible with the US-UK extradition treaty, the judge said this "didn't provide the basis to prevent" his extradition.

But Assange's team argued that he could not be extradited on health grounds and Baraitser accepted that Assange suffers from clinical depression and had struggled to control thoughts of suicide or self-harm. the judge agreed with this argument and ordered his discharge.

Assange has consistently claimed he was acting as a journalist but Baraitser said Assange's activity in receiving hundreds of thousands of classified files from US Army intelligence analyst Chelsea Manning went beyond investigative journalism.

The judge dismissed a range of Assange team protests about the extradition, including their claim that a jury in any US court action will be made up of government employees and therefore biased, and that he will not be afforded protections under the US Constitution.

"I've considered and rejected any suggestion that as a foreign national Mr Assange would not be afforded the protections of the US Constitution," she said.

Prosecutors in the US say Assange conspired with Manning to hack into a Pentagon computer and release hundreds of thousands of secret diplomatic cables and military files.

Among those files published in 2010 by WikiLeaks was a video of a 2007 Apache helicopter attack by American forces in Baghdad, which killed a dozen people.

Assange's supporters say the leaked documents exposed US military wrongdoing and argue he was acting as a journalist.

The Australian national has been in a British prison since his ejection from the Ecuadorian Embassy in London in April 2019. He was granted asylum by Ecuador in 2012 over fears he could face possible extradition to the US related to his work with WikiLeaks. He also sought to avoid extradition to Sweden over sex offence allegations, which were subsequently dropped in 2015.

Ahead of the ruling, Assange's partner, Stella Moris, with whom he had two children while living in the embassy, told NBC News in a US TV exclusive that he was "an innocent man who's been in prison for almost two years for publishing the truth about state crimes, about war crimes, about human rights abuses. This is a stain on democracy."

Calling on President Donald Trump and President-elect Joe Biden to pardon him, she said it would save Assange's life, save her family's life and "also save the First Amendment."

"Democracy itself is at stake with this case, because it's a frontal attack on our right to know, on holding governments accountable," said Moris, who was a member of Assange's legal team.

Assange has remained in prison since the US extradition hearings began in February. They were postponed until September due to the coronavirus pandemic.

Moris said she was "extremely worried" because there had been a Covid-19 outbreak on his wing. She added that her children spoke to Assange daily, "but they should be with their father. They should have their father's comfort in his house. And they can't."

Agnes Callamard, director of Columbia University Global Freedom of Expression, an initiative that works to protect the free flow of information, said that "Assange's leaks and reporting are protected under the right to freedom of expression" and that "reporting unlawful killings is protected under international law."

Speaking ahead of the ruling, she said the English court should reject the extradition to the US where Assange would likely "become the first journalist to be prosecuted for exposing human rights violations and war crimes."

"Governments may legitimately withhold information but not that which concern violations of international human rights and humanitarian law because of their public interest," she added.

The ruling comes at a delicate time for transatlantic relations. The UK is keen to strike a post-Brexit trade deal with the U.S., which is itself preparing for a new administration under Biden.

Last year, the United States refused to extradite to Britain a US diplomat's wife, Anne Sacoolas, who was involved in a car crash that killed a British teenager.