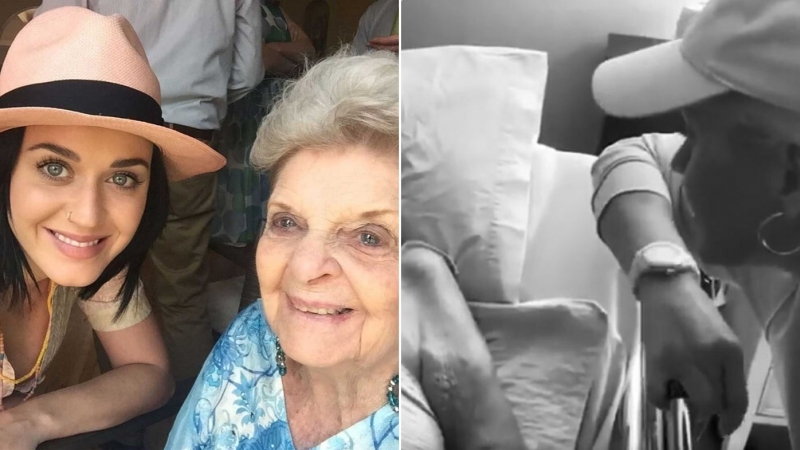 Though Katy Perry’s grandmother won’t get a chance to meet her great-grandchild, at least we know the 99-year-old Ann Pearl Hudson learned of Katy’s pregnancy before passing away.

“Grandma, it’s Katy,” the 35-year-old Katy Perry says to her grandmother, Ann Pearl Hudson, in a video accompanying the Mar. 9 post confirming Ann’s passing. In the video, the 99-year-old is in a hospital bed and slightly off-screen. As Ann Pearl rests, Katy has some exciting news to share. “I just wanted to tell you I know you’re not feeling well, but I wanted to share some exciting news with you. You remember me, Katy? I’m gonna tell you that — I’m gonna have a baby. I’m pregnant, Grandma.”

“Katy is finally pregnant. She’s the last one. I have a baby inside me,” adds Katy, which prompts Ann Pearl to go, “uh-uh.” “Don’t say uh-uh!” Perry says, laughing that her grandmother didn’t believe her. Unfortunately, the 99-year-old won’t get a chance to meet Katy and Orlando Bloom’s child, for she passed away a day before Katy shared this heartwarming moment. “I don’t know when a soul enters a new vehicle but if there is an afterlife where there’s a waiting room of the coming and going my mind wonders if the soul that is waiting to come into my world is getting a kiss on the forehead from my sweet Grandma that departed this earth yesterday. My heart hopes so,” she captioned the post.

“Ann Pearl Hudson was a fighter. She survived the Great Depression, raised 3 kids on her own as a seamstress, making G strings for showgirls and other such characters in Vegas,” continued Katy as she eulogized her late grandmother online. “She was always authentically herself, funny and full of all the sweet cozy things you think of when you think of grandmas. She gave me crisp dollar bills in hallmark cards, she let us eat her favorite almond cookies from the 99 cent store while we asked questions about the different fans she had displayed on her walls. She was a wonderful grandma, and I will forever carry some of her in me.”

Katy attributed her “whit,” “authenticity,” “stubbornness,” “style,” and “fighter spirit” to her grandmother. These qualities will likely be passed down to her unborn child, something that will surely please the “Never Worn White” singer.

Since confirming her pregnancy, Katy has taken every moment to show off her bump. Her growing belly was on full display during the Women’s Cricket World Cup Final on Mar. 4. While performing in front of the crowd in Melbourne, Australia, Katy also revealed that she “hope(s) it's a girl” while flaunting her pregnant figure in a bright pink jumper with shorts and matching cape.

US army begins withdrawing from Afghanistan