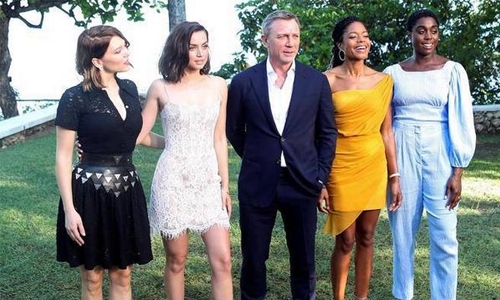 There has been a lot of speculation on who will replace actor Daniel Craig as the next James Bond and the upcoming film ‘Bond 25’ may just solve the mystery! The next James Bond film will show the secret agent pass the torch to another actor, reported Fox News. If the latest report is anything to go by, the fans will be surprised to learn which star will be the new 007 and get the licence to kill.

According to the outlet, the next James Bond will be played by ‘Captain Marvel’ fame actor Lashana Lynch. The 31-year-old actor had a breakout role in the 2019 hit ‘Captain Marvel’ as Maria Rambeau, the titular superhero’s best friend, and fellow Air Force pilot. According to a report by The Daily Mail, as cited by Fox News, screenwriter Phoebe WallerBridge intervened to pass the torch on to the star.

“There is a pivotal scene at the start of the film where M says ‘Come in 007,’ and in walks Lashana who is black, beautiful and a woman. It’s a popcorn-dropping moment. Bond is still Bond but he’s been replaced as 007 by this stunning woman,” a Bond insider stated. “Bond, of course, is attracted to the new female 007 and tries his usual tricks, but is baffled when they don’t work on a brilliant, young black woman who basically rolls her eyes at him and has no interest in jumping into his bed.

Well, certainly not at the beginning,” the source added. The source also claimed that the phrase “Bond girls” is now verboten: The females in the spy franchise are now reportedly ordered to be called “Bond women.”