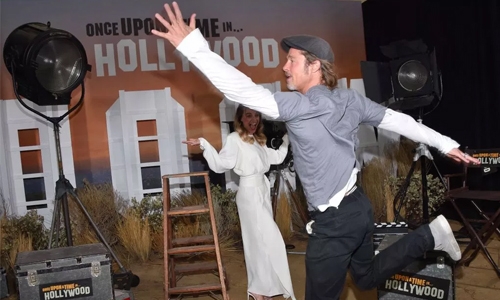 Hollywood star Brad Pitt photobombing Margot Robbie during a promotional event dedicated to their upcoming release ‘Once Upon A Time In Hollywood’, is the coolest thing you will see on the internet today. As the release is inching closer, star-cast of the film, including Brad Pitt, Leonardo DiCaprio, Margot Robbie, and Quentin Tarantino have finally kicked started the promotional tour.

During one of the promotional events on Thursday, Pitt quirked things up by photobombing Robbie in the middle of a photo shoot. The moment was successfully captured by the lens and the pictures will leave you in splits. In the photos Pitt can be seen leaping in front of the camera leaving Robbie, standing in the background, with a huge grin.

And if Pitt and Robbie’s real-life chemistry is any indication, their reel life romance in the upcoming film will be nothing less than fireworks. Set in the backdrop of 1969 Los Angeles, the trailer features DiCaprio and Pitt as fading TV star Rick Dalton and his stunt double Cliff Booth, respectively. The film follows them as they make their way through a changing film industry, and fight to reclaim their fame.

Olivia Culpo opens up about struggle with depression