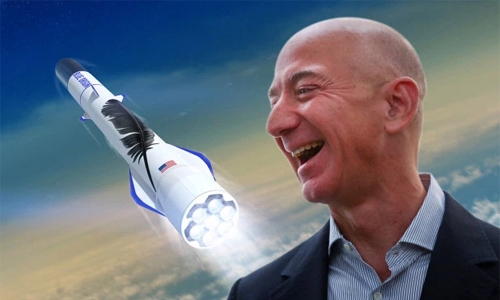 New space race to bring satellite internet to the world

Anxiety has set in across the space industry ever since the world’s richest man, Jeff Bezos, revealed Project Kuiper: a plan to put 3,236 satellites in orbit to provide high-speed internet across the globe. Offering broadband internet coverage to digital deserts is also the goal of the company OneWeb, which is set to start building two satellites a day this summer in Florida, for a constellation of over 600 expected to be operational by 2021 Billionaire Elon Musk’s SpaceX is equally active: it’s just received a clearance to put 12,000 satellites in orbit at various altitudes in the Starlink constellation. Not to mention other projects in the pipeline that have less funding or are not yet as defined.

Is there even enough space for three, four, five or more spacebased internet providers? At the Satellite 2019 international conference in Washington this week, professionals from the sector said they feared an expensive bloodbath -- especially if Bezos, the founder of Amazon, decides to crush the competition with ultra-low prices. “Jeff Bezos is rich enough to put you out of business,” said Matt Desch, the CEO of Iridium Communications.

Iridium knows all about bankruptcy. The company launched a satellite phone in the 1990s -- a brick-like set that cost $3,000 with call rates of $3 a minute. Barely anyone subscribed at the dawn of the mobile era. The firm eventually relaunched itself and has just finished renewing its entire constellation: 66 satellites offering connectivity, but not broadband, with 100 percent global coverage to institutional clients including ships, planes, militaries and businesses.

“The problem with satellites, it’s billions of dollars of investments,” said Desch. And if “you spend billions and you get it wrong, you end up creating sort of a nuclear winter for the whole industry for 10 years. We did that,” he added. “These guys coming in, I wish them really well... I hope they don’t take 30 years to become successful like we did.”

Streaming on the plane

Having internet beamed in from space is more of a priority for isolated zones than it is for cities, where users have fiber optic or cable connections. With satellite constellations, it doesn’t matter where you are in the world: an antenna is all you need to get broadband. “It ’s just like having a very tall cell tower,” said Al Tadros of Maxar, which builds satellites. The other advantage of the newly announced constellations are their relatively low orbit, which is important for reducing latency, key in curbing lag in video calls or games, for example.

Isolated areas may be where the technology is required, but there may not be enough customers to make the endeavor profitable. That’s why OneWeb has lowered its sights and will first target providing internet services to planes (imagine getting Netflix on your next long haul) or to ships, where there is a huge demand. “The challenge in monetizing is being able to get through those first few years, where you have to put in all your capital expenses, but not being able to get enough revenues to keep you afloat,” Shagun Sachdeva, a senior analyst at Northern Sky Research, said.

Sachdeva expects most of the companies to die off, adding that the market will eventually have room for “maybe two” and that space-delivered internet services won’t be commonplace for at least five to 10 years. Amazon is only just getting off the ground, and faces the hurdle of acquiring rights to the frequency spectrum. By arriving late, they’re already behind the curve, said Michael Schwartz of operator Telesat, which is building its own constellation to be used by companies. “People don’t pay enough attention about the need for spectrum rights.”

But Amazon’s many advantages are abundantly clear: the group has a formidable IT infrastructure on the ground that can support the satellite network. And Bezos finances his own rocket company, Blue Origin, which should be able to secure him a competitive price for the dozens of launches needed for the constellation. These are factors that OneWeb’s chief financial officer Thomas Whayne acknowledged during a panel Monday: “If they are serious, they will do it and will do it well.”

Clooney says ‘No’ to be Godfather to the Royal Baby