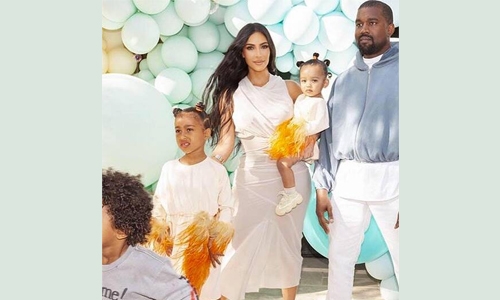 Kim Kardashian is overflowing with love for her children and her latest Instagram post is proof. As she counts down the days before the arrival of her fourth baby with husband Kanye West via surrogate, the ‘Keeping Up With The Kardashians’ star shared an adorable picture of her two youngest kids, 3-yearold son Saint and 15-monthsold daughter Chicago on the photo-sharing application. The soon-to-be mother captioned the love-filled post, “My babies are my life!!!!” In the still, Kardashian’s son sweetly leans in to kiss his younger sister on the cheek as the duo can be seen sitting next to each other on a couch.

Saint can be seen wearing matching rose-coloured shorts and shirt set while Chicago is seen dressed in a simple white dress. Missing from the sweet sibling’s photo was Kardashian’s eldest daughter North (5), who got her own loving shout-out from her beloved mother a few days earlier. Praising her daughter’s sense of style on Thursday, Kardashian revealed that she had a special pair of shades from her new sunglasses line with Carolina Lemke designed especially for her girl, reported People. “I didn’t think my daughters love for my clothes and jewellery would happen so soon.

I’ll literally be working and come home to find North dressed up in all of my things,” she wrote on Instagram, alongside an adorable still of her daughter sporting the custom shades. The reality TV star went on to jokingly share that she had an ulterior motive for getting custom made shades for North as Kardashian didn’t want to share her own pair of shades. “I made her these kid-size @ carolinalemkeberlin sunglasses because I really wouldn’t share mine lol!” she wrote, adding, “I love my fashionista Northie so much!” While celebrating the impending arrival of her fourth child last week, Kardashian’s famous friends and family gathered at her home for a “CBD & Meditation”-themed baby shower.

During the celebration, each person in attendance was given a navy blue Yeezy slides and everyone took part in a sound bath. In addition, baby blue-coloured decorations were placed all around the home as well as a Name Game board was also there, where many suggested unique names for the baby. Explaining how she decided on the baby shower theme, Kardashian admitted she was “freaking out” because “the baby is coming in, like, two weeks.”

“I thought what better way to celebrate than to have a little CBD” Kardashian told her guests, including her mother Kris Jenner and sister Kourtney Kardashian as well as Chrissy Teigen, Paris Hilton, Larsa Pippen, her daughter North and niece Penelope Disick. The reality star added, “I thought it was kind of ridiculous to have a fourth baby shower. But I thought I’m freaking the f-- out having a fourth kid. ... So everyone have a puff and put on some oil.

No change in Qatar stance