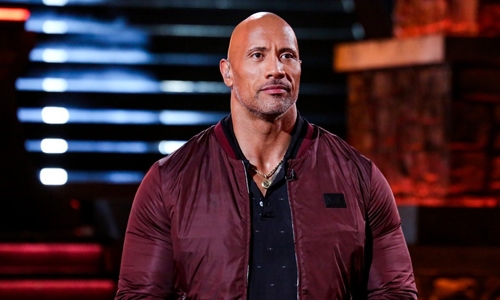 Dwayne Johnson popularly known by his stage name ‘The Rock’ received a beautiful gesture from his fans. The wrestler posted a small video where he can be seen surrounded by his frenzy fans, who were waiting for him ‘by the jet to say goodbye.’

The actor expressed gratitude on Instagram saying, “Gotta tell ya after a long long week of flying in and out for work daily and averaging 4hrs sleep a night and dog tired -- surprises like these fans waiting by the jet to say goodbye means a helluva lot and has that powerful way of giving me energy and mana to keep on keepin’ on. Thank y’all for being the best fans in the world.

See ya down the road.” The ‘best fans’ which were mostly females seems to be striving hard to click a selfie with the actor while Dwayne can be seen smiling and posing in the video. The excited fans can be seen screaming and shouting after meeting their favourite actor.

Meanwhile, on the work front, Dwayne is shooting for his next film ‘Jumanji’, where he will be seen sharing screen space with Kevin Hart, Karen Gillan, Jack Black along with singer Nick Jonas, who will be essaying the role of Jefferson ‘Seaplane’ McDonough. Jake Kasdan, who has co-written the film with Scott Rosenberg and Jeff Pinker will be directing the film. ‘Jumanji’ is the sequel to the 2017 film ‘Jumanji: Welcome to the Jungle’. The film will premiere on December 13.