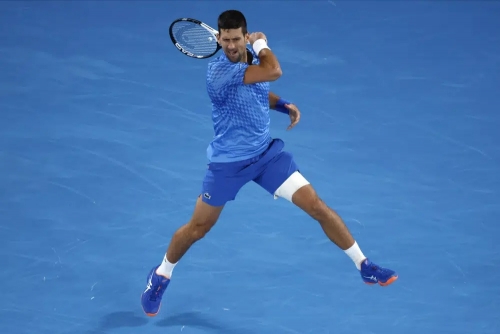 Andy Murray triumphed in an epic, five-set Australian Open battle which finished in the early hours of Friday in Melbourne after ninetime champion Novak Djokovic defied injury and a drunken heckler to progress to the third round.

Former world number one Murray, 35, will play 24th seed Roberto Bautista Agut of Spain in round three after his second successive five-set triumph this week.

“It was unbelievable that I managed to do it, to turn it around,” said the three-time Grand Slam champion, who has a metal hip and looked on the verge of retirement four years ago at Melbourne Park.

“I don’t know how I managed to get through it.” Murray had stunned Italian 13th seed Matteo Berrettini in his opening match in another five-setter. Despite the drama, serious questions were being asked of the late finish.

“It is essential we create better rules in tennis regarding the weather (light and wind) and starting times or cutoff times for matches,” tweeted tennis legend Martina Navratilova. “Murray and Kokkinakis will finish around 4am.

Crazy- no other sport does this @AustralianOpen.” With the shock exit on Wednesday of hobbling defending champion Rafael Nadal, the top two men’s seeds are both now gone. With top-ranked Carlos Alcaraz also absent through injury, it presents a huge opportunity for Djokovic.

The 35-year-old Serb required a medical timeout and had heavy strapping on his left thigh against Couacaud. He was also bothered by some rowdy fans and at one point during the match demanded that a drunken fan be thrown out. But Djokovic recovered his poise and fitness to beat and will face 27th seed Grigor Dimitrov in round three.

“There was a lot happening tonight in the match,” Djokovic, who has been struggling with a hamstring injury, told the Rod Laver Arena. His on-court interview was momentarily paused when a spectator shouted out.

“I love you too, thank you,” said Djokovic, who has enjoyed a warm return to Melbourne Park following his deportation a year ago because of his stance on Covid vaccines. Fellow seeds Andrey Rublev, Dan Evans and Holger Rune all also won in the second round.

Among the leading men’s players who lost out yesterday, world number three Ruud was always struggling against hard-hitting Jenson Brooksby, and the Norwegian went down in four sets to the American, 6-3, 7-5, 6-7 (4/7), 6-2. Ruud, who could have become world number one in Melbourne, refused to blame an abdominal injury.

“This is a dream and I don’t want to wake up at all,” said 113th-ranked Popyrin, who was reduced to tears by the crowd chanting his name. Zverev, the 12th seed, suffered another setback on his return from serious injury as he lost to 107th-ranked Michael Mmoh.

In the women’s draw it looked as if most of the top seeds would sail through. But after the clock ticked past midnight, Tunisian number two seed Jabeur was beaten 6-1, 5-7, 6-1 in 1hr 41min by Czech world number 86 Marketa Vondrousova.

It left Jabeur still waiting to win a maiden Grand Slam title. Earlier in the day, Aryna Sabalenka showed why she is a serious contender by powering into the third round, defeating American Shelby Rogers 6-3, 6-1. Also safely through was France’s fourth seed Caroline Garcia, a 7-6 (7/5), 7-5 winner over former US Open finalist Leylah Fernandez.

UAE, India in talks to settle non-oil trade in rupees