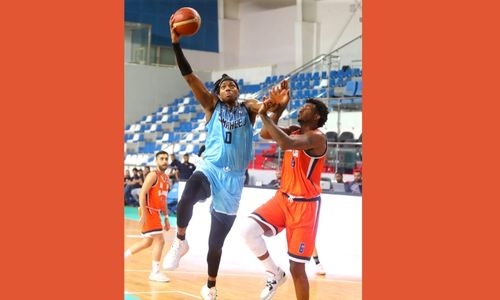 Samaheej claimed a comefrom-behind 81-68 victory over Al Hala last night during their week three clash in the 2022/2023 Zain Bahrain Basketball League, currently being played at the Zain Basketball Arena in Um Al Hassam. Samaheej faced an early deficit in the first half but were able to turn things around before the interval to take a slim 37-34 advantage into the locker rooms. They then rode their momentum into the last two quarters, outscoring Hala 44-34 to claim their final winning margin.

The victors enjoyed leads as big as 15 points late in the final canto en route to the final buzzer. Ahmed Fateel led four Samaheej players in double figures with 21 points, while American Stephen Hurt added 18 to go with 14 rebounds. Captain Hussain Busafwan chipped in with 16 markers, including four three-pointers. Basel Adel had 10 for the victors. For Hala, Nigel Spikes from the US was their leading scorer with 24 points. He also grabbed 15 rebounds in the game.

Ahmed Khalifa was their only other player in double-figures with 17 points in the losing effort. Samaheej were an efficient 30-for-58 from the field for a 51 per cent shooting clip. They tripled their output over Hala from beyond the arc, making 12-of-17 triples with Hala only connecting on four from 26 attempts.

Hala also had the better of the points from turnovers, fast break points, second chance points and bench points, but they could not translate those advantages to the win. With the result, Samaheej claimed their first victory after three tries. Hala, on the other hand, remained winless after three games. Samaheej joined defending league champions Manama and Al Ettihad as winners from this week’s action so far. Manama outclassed Nuwaidrat 84-67, while Ettihad edged past Al Najma 100-94. The third week of league play wraps up tonight with Bahrain Club taking on Sitra in the lone fixture at 7.30pm.

Bahrain’s Al Ahli will tip off their Group C campaign in the 34th Arab Clubs Basketball Championship against Al Sadd from Qatar. The regional competition is scheduled to be held from October 5 to 15 in Kuwait City, and the nationals will be in action on opening night.

The Bahrainis will then face off with Kazma from Kuwait the next evening on October 6, before completing the preliminaries against Al Bashaer from Oman on October 8. The group stage schedule was released yesterday by the Arab Basketball Confederation (ABC).

Sixteen teams from across the region are set to lock horns in the tournament, with three clubs representing host nation Kuwait. Ahli are the only Bahraini outfit in the competition. Group A features host team Al Kuwait Sports Club, Al Ittihad of Alexandria from Egypt, Ahli Aleppo of Syria, and Al Ahly Benghazi from Libya.

Group B is comprised of defending champions Al Ahly of Egypt, Al Riyadi Club Beirut of Lebanon, Al Gharafa from Qatar, and a club from Yemen; while Group D consists of Jahra from Kuwait, Beirut Club of Lebanon, Wedad Boufarik of Algeria, and Tigris from Iraq